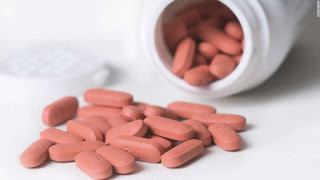 ​Ibuprofen pills
Ibuprofen has a negative impact on the testicles of young men, a study published Monday in the journal Proceedings of the National Academy of Sciences found. When taking ibuprofen in doses commonly used by athletes, a small sample of young men developed a hormonal condition that typically begins, if at all, during middle age. This condition is linked to reduced fertility.
Advil and Motrin are two brand names for ibuprofen, an over-the-counter pain reliever. CNN has contacted Pfizer and Johnson & Johnson, the makers of both brands, for comment.
The Consumer Healthcare Products Association, a trade group that represents manufacturers of over-the-counter medications and supplements, "supports and encourages continued research and promotes ongoing consumer education to help ensure safe use of OTC medicines," said Mike Tringale, a spokesman for the association. "The safety and efficacy of active ingredients in these products has been well documented and supported by decades of scientific study and real-world use."
The new study is a continuation of research that began with pregnant women, explained Bernard Jégou, co-author and director of the Institute of Research in Environmental and Occupational Health in France.
Jégou and a team of French and Danish researchers had been exploring the health effects when a mother-to-be took any one of three mild pain relievers found in medicine chests around the globe: aspirin, acetaminophen (also known as paracetamol and sold under the brand name Tylenol) and ibuprofen.
Their early experiments, published in several papers, showed that when taken during pregnancy, all three of these mild medicines affected the testicles of male babies.

Testicles and testosterone
Testicles not only produce sperm, they secrete testosterone, the primary male sex hormone.
All three drugs then are "anti-androgenic," meaning they disrupt male hormones, explained David M. Kristensen, study co-author and a senior scientist in the Department of Neurology at Copenhagen University Hospital.
The three drugs even increased the likelihood that male babies would be born with congenital malformations, Kristensen noted.
Tringale noted that pregnant and nursing women should always ask a health professional before using medicines.
Knowing this, "we wondered what would happen in the adult," he said. They focused their investigation on ibuprofen, which had the strongest effects.
A non-steroidal anti-inflammatory drug, ibuprofen is often taken by athletes, including Olympians and professional soccer players for example, before an event to prevent pain, Jégou said. Are there health consequences for the athletes who routinely use this NSAID?
The research team recruited 31 male volunteers between the ages of 18 and 35. Of these, 14 were given a daily dosage of ibuprofen that many professional and amateur athletes take: 600 milligrams twice a day, explained Jégou. (This 1200-mg-per-day dose is the maximum limit as directed by the labels of generic ibuprofen products.) The remaining 17 volunteers were given a placebo.
For the men taking ibuprofen, within 14 days, their luteinizing hormones -- which are secreted by the pituitary gland and stimulate the testicles to produce testosterone -- became coordinated with the level of ibuprofen circulating in their blood. At the same time, the ratio of testosterone to luteinizing hormones decreased, a sign of dysfunctional testicles.
This hormonal imbalance produced compensated hypogonadism, a condition associated with impaired fertility, depression and increased risk for cardiovascular events, including heart failure and stroke.
For the small group of young study participants who used ibuprofen for only a short time, "it is sure that these effects are reversible," Jégou said. However, it's unknown whether the health effects of long-term ibuprofen use are reversible, he said.
After this randomized, controlled clinical trial, the research team experimented with "little bits of human testes" provided by organ donors and then conducted test tube experiments on the endocrine cells, called Leydig and Sertoli cells, which produce testosterone, explained Jégou.
The point was to articulate "in vivo, ex vivo and in vitro" -- in the living body, outside the living body and in the test tube -- that ibuprofen has a direct effect on the testicles and so testosterone.
"We wanted to understand what happened after exposure (to ibuprofen) going from the global human physiology over to the specific organ (the testis) down to the endocrine cells producing testosterone," Kristensen said.
More than idle curiosity prompted such an extensive investigation.
Questions around male fertility
The World Health Organization estimates that one in every four couples of reproductive age in developing countries experiences childlessness despite five years of attempting pregnancy.
A separate study estimated that more than 45 million couples, or about 15% of all couples worldwide, were infertile in 2010, while another unrelated study suggested that men were solely responsible for up to 30% and contribute up to 50% of cases overall.
Meanwhile, a recent analysis published in the journal Human Reproduction Update found that sperm counts of men in North America, Europe, Australia and New Zealand are plunging. Researchers recorded a 52% decline in sperm concentration and a 59% decline in total sperm count over a nearly 40-year period ending in 2011.
Erma Z. Drobnis, an associate professional practice professor of reproductive medicine and fertility at the University of Missouri, Columbia, noted that most drugs are not evaluated for their effects on human male fertility before marketing. Drobnis, who was not involved in the new study, has done extensive research into sperm biology and fertility.
"There is evidence that some medications are particularly harmful to the male reproductive system, including testosterone, opioids, antidepressants, antipsychotics, immune modulators and even the over-the-counter antacid cimetidine (Tagamet)," she said. "However, prescribing providers rarely mention these adverse effects with patients when prescribing these medications.
She believes the new study, though small, is "important" because ibuprofen is among the most commonly used medications.
Though the new research indicates that ibuprofen disrupts the reproductive hormones in healthy young men, she thinks it's possible there's an even greater negative effect in men with low fertility. The other OTC drugs concerning for potential fathers are cimetidine and acetaminophen. She recommends that men who are planning to father a child avoid drugs for several months.
"Larger clinical trials are warranted," she said. "This is timely work that should raise awareness of medication effects on men and potentially their offspring."
Jégou agrees that more study is needed to answer many questions, including whether ibuprofen's effects on male hormones are seen at low doses and whether long-term effects are reversible.
"But the alarm has been raised now," he said. "if this serves to remind people that we are really dealing with medical drugs -- not with things which are not dangerous -- this would be a good thing."
"We need to remember that it is a pharmaceutical compound that helps a lot of people worldwide," Kristensen said. He noted, though, that of the three mild analgesics examined, ibuprofen had "the broadest endocrine-disturbing properties identified so far in men."-Online. TOP NEWS