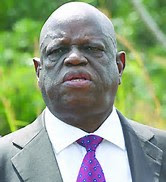 ​
Ex- War Veterans minister Tshinga Dube , says he is not bitter at being left out in the Vice-President's post or a ministerial post in President Emmerson Mnangagwa's administration.
Dube told Bulawayo journalists on Saturday that although he was eligible to land the vice-presidency on grounds of being one of the most senior Zanu PF officials from Matabeleland region, he was content at remaining a legislator.
"I have never done anything for a price. If you are given powers to choose whom to work with, you choose those that you believe will deliver. Otherwise, I don't feel rejected at all that I am not a VP, let alone a minister," he said.
"I am happy I am still the MP for Makokoba and if the constituency rejects me, that is when I will feel rejected and disappointed."
Before Mnangagwa appointed his deputies late last month, Dube was widely seen as one of the contenders in the race for the VP post, together with Kembo Mohadi, Home Affairs minister Obert Mpofu, National Assembly Speaker Jacob Mudenda and Zanu PF spokesperson Simon Khaya Moyo.
Mohadi and retired Zimbabwe Defence Forces commander General Constantino Chiwenga eventually landed the posts.-Online. POLITICS