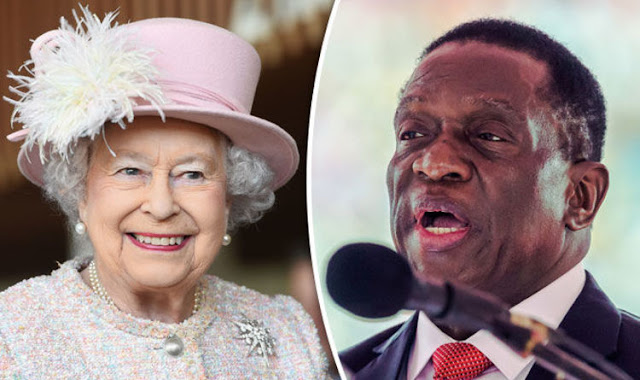 ​Queen Elizabeth II and President Emmerson Mnangagwa
When asked by a diplomat at a party what her hopes were for this year, the Queen replied, wishing not for world peace, nor even happiness for her own family but "that Zimbabwe will rejoin the Commonwealth".
This group of former British colonies has long been an entity close to the monarch's heart, and she was known to be upset when Zimbabwe was suspended from the organisation in 2003 after its leader, Robert Mugabe, had ignored repeated pleas over human rights abuse.
Mugabe's despotic reign saw the mineral-rich country spiral into chaos, with many of its people reduced to poverty.
His 37-year rule of persecution and bloodshed ended two months ago and his successor, Emmerson Mnangagwa, has promised a return to democracy, with elections this summer.
And in welcome news for the Queen, Mnangagwa has made encouraging comments about the Commonwealth and also hailed Brexit as an opportunity to forge closer links with the UK. He said: "I'll be happy to deal with joining. I have nothing against the Commonwealth club."
And he added: "Britain will need us and we will make sure we become very close to them."
The Zimbabwe government is also said to be planning a tribunal that will determine compensation for the hundreds of white farmers who lost their land under Mugabe's rule.
Foreign Secretary Boris Johnson has said that Britain could take steps to stabilise Zimbabwe's wildly fluctuating currency but this depended on "democratic progress".-Express. INTERNATIONAL