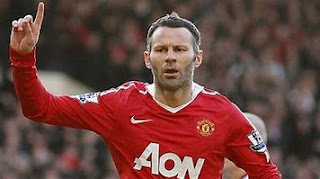 ​Ryan Giggs
Manchester United legend, Ryan Giggs has been appointed Wales manager on a four-year contract.
The 44-year-old former Manchester United winger succeeds Chris Coleman, who left for Sunderland in November.
Coleman's assistant Osian Roberts, former Wales striker Craig Bellamy and Mark Bowen were also interviewed.
Giggs had long been a target for the Football Association of Wales (FAW) and was the favourite for the role once Coleman departed after Wales failed to qualify for the 2018 World Cup.
The FAW confirmed the appointment on social media and in a statement Giggs said: "I am so proud to have been given the honour of managing the national team.
"The challenges that we have ahead of us with the Nations League and qualification for Uefa Euro 2020 excite me a great deal.
"I can't wait to start working with the players as we prepare for those crucial games later in the year."
FAW chief executive Jonathan Ford said: "With his vast amount of experience having played, coached and managed the biggest club in the world, we are confident of a successful future for our national team."
Giggs won 64 caps between 1991 and 2007 and captained his country - but he was criticised for regularly pulling out of squads and especially for missing friendly matches.
Before Giggs' appointment former team-mate Clayton Blackmore told BBC Sport Wales their former boss Sir Alex Ferguson had been responsible for the no-shows.
The Manchester United great was in caretaker charge of the Red Devils for four games at the end of the 2013-14 season following the sacking of David Moyes.
He spent the next two seasons as Louis van Gaal's assistant, but left after Jose Mourinho was appointed manager at Old Trafford.
Giggs lost out on the Swansea job to Bob Bradley after being interviewed for the manager's role at the Liberty Stadium in October 2016.
It is understood Bellamy and Roberts, who is the FAW's technical director, also had their supporters at Welsh football's governing body.
Bellamy, 38, won 78 caps and is the country's fourth most-capped player.
The former Newcastle, Liverpool and Blackburn forward is currently an academy coach at Cardiff City, where he ended his playing career in 2014. -SPORTS