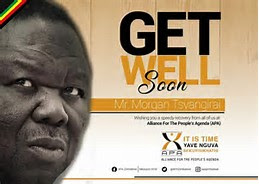 ​
BY NEWSANCHOR REPORTER
Following widespread fake news on social media claiming opposition Movement for Democratic Change (MDC) leader Morgan Tsvangirai had died, his family has come out to speak on his health and decision of his political future.
The MDC-T leader has been battling colon cancer and has hinted at retiring on health grounds, stirring discord in the party as his deputies angle to succeed him. So pronounced is the fight between Vice Presidents Thokozane Khupe and youthful and front-runner Nelson Chamisa.
Another Tsvangirai deputy, Elias Mudzuri is acting party president.
Hereunder is the official statement released to the media by the opposition leader's family, represented by sons Collins and Manasa;
"The last two years have not been easy for our family following the public revelation that Dr Morgan Richard Tsvangirai, the former Prime Minister of the Republic of Zimbabwe and President of MDC-T, had been diagnosed with colon cancer. Not only is he a public figure, holding deep convictions on the governance and development of our country, he is also dear to the family, more particularly his children and grandchildren.
"Several years ago, he made the conscious move into public life and we shall always respect it, lending as much support to him as we can. Most of his time is naturally spent with his wider chosen family in politics, civics and society in general. We are indebted to the friendship, love and caring he continues to receive from all quarters, despite political differences including the recent visit by President Emmerson Mnangagwa. We are conscious that politics can be full of controversy, some of it stalked by the media.
"We urge our wider family to see beyond the current difficulties and put love before anything else. We are confident that our God will heed all your prayers for which we continue to thank, and that Dr Tsvangirai will be back to full health again. We appreciate the arrangement that the party has made to ensure that he gets as much time as possible for rest and recuperation. During this period, we shall provide the party and the public with updates on the progress he is making but only through the MDC T Acting President to avoid misunderstandings, until he is back to full health and re-joins his colleagues in completing what he has worked so hard to achieve.
"Lastly and to correct any misinformation that has circulated in the social media, the family wishes to advise that at no time has it, nor will it try to influence Dr Tsvangirai's political decisions, during his current illness or thereafter.
May the Lord breathe His many mercies on and bless our land." TOP NEWS