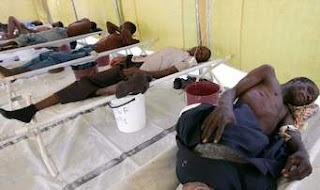 ​(File photo): Cholera patients following an outbreak
Government has reactivated all its rapid response machinery to respond to a cholera outbreak that has so far claimed four lives in Chegutu.
Addressing a Press conference in Harare yesterday on the latest situation regarding the outbreak, Health and Child Care Minister Dr David Parirenyatwa said although cases seemed to be going down, government was on high alert as there could be other cases still incubating in other parts of the country.
The first case was recorded on January 8, 2018 and since then, cases were being reported at Chegutu District Hospital until January 20.
"Although the cases are declining, it is very critical to note that all these suspected cases are all linked to funerals that occurred in the locality," said Dr Parirenyatwa.
"The index (first case) of the outbreak was an elderly woman who had died, and many people, including some from Mabvuku and Epworth, attended the funeral. Some of the deceased also handled the woman's body, hence we cannot dismiss possibility of other cases incubating from any part of the country."
Dr Parirenyatwa said although authorities could not trace where the elderly woman could have contracted cholera, all the 32 cases which had since been recorded, including the three subsequent deaths, were linked to the elderly woman's funeral. Government, he said, had since followed up on people who attended the funeral and put them under surveillance for any possible signs and symptoms of cholera.
"All provinces have been put on high alert for cholera," said Dr Parirenyatwa.
"The district civil protection committee has been activated; the provincial rapid response team is on the ground, while the national rapid response team is conducting a cholera assessment in the affected province with assistance from the World Health Organisation and UNICEF."
Zimbabwe, Dr Parirenyatwa said, was facing twin challenges of cholera and typhoid. Typhoid, which was first reported in Mbare, had since spread to many suburbs in the capital.
"Unlike typhoid, cholera is more deadly and kills faster," said Dr Parirenyatwa.
Speaking at the same occasion, WHO acting representative Dr Juliet Nabyonga said they remained committed to supporting the Government of Zimbabwe to contain the outbreak from spreading to other parts of the country.
She said to date, four countries — Zambia, Malawi, Kenya and Uganda — had been affected by cholera. Dr Nabyonga said other countries managed to contain the outbreak, but Zambia, which is just next door to Zimbabwe, was still struggling to do so. At least 50 deaths and over 3 000 cases of cholera have so far been reported in the Zambian capital, Lusaka.-Online. TOP NEWS