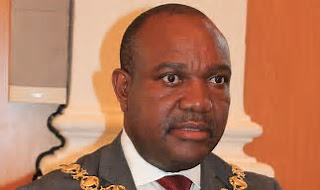 ​AT least one person was killed, while two others were seriously injured yesterday evening in Harare when Zimbabwe Republic Police (ZRP) officers clashed with commuters in the central business district (CBD).
Two vehicles were burnt to shells, while Harare Central Police Station was stoned and heavily damaged by a rowdy mob.
Windows at the entrance to the Charge Office were shattered by missiles as people protested the death of a man in the capital.
The mayhem followed a directive by Harare City Council banning commuter omnibus operators and on-street vendors from operating in the CBD.
There were running battles Thursday night as the crowd threw missiles at police officers who fired teargas canisters.
This resulted in the death of one person.
Eyewitnesses said trouble started when police approached a Chitungwiza-bound kombi that was dropping passengers at Seke Road flyover.
The driver is said to have resisted instructions by the police not to drop passengers at the undesignated point.
This resulted in an altercation that exploded into a running battle.
Police fired teargas canisters to wade off the marauding crowd.
"The police fired warning shots to try to disperse the swelling crowd who were already jeering at them," said Mr Marvellous Vhiriri.
The crowd latter regrouped and pitched up at ZRP Charge Office in central Harare where they threw missiles leaving a trail of destruction.
Meanwhile, Local Government minister July Moyo has ordered the immediate suspension of the ban on commuter omnibuses from entering the CBD. Cllr Bernard Manyenyeni  (pictured above) has called on the government and council to devise proper ways to decongest the city centre and find humane ways of dealing with rampant pirating, vending and lawlessness that have characterised the city for years.-Online/ Staff Reporter. TOP NEWS