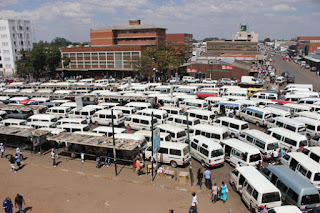 ​An aerial view of Copacabana rank in the CBD

BY JAMES MUONWA
The joint 'militarised' operation to rid the Harare Central Business District (CBD) of commuter omnibus operators and illegal pirate taxis has elicited condemnation from a cross-section of residents, who use public transport to commute to and from work.
Harare City Council, with the help of members of the Zimbabwe National Army and police, this week unleashed terror on operators who were resisting calls by authorities to move to designated termini on the peripheries of the city.
The omnibus operators and pirates are accused of causing lawlessness in the CBD by picking and dropping passengers at undesignated points. At times, their cat-and-mouse games with authorities have resulted in tragic accidents as they flee arrest.
On Thursday, armed police and soldiers patrolled the CBD while unleashing terror on commuter omnibus drivers who were defying the council directive to vacate the CBD.
The Combined Harare Residents Association (CHRA) has come out strongly condemning the 'militarised' move by council to remove commuter operators from the city centre by force.
"CHRA would like to publicly state that the recent move by the Harare City Council to ban commuter omnibuses from the Central Business District (CBD) is ill-conceived and clearly reveals the lack of consultation of critical stakeholders before decisions that affect the general public.
"The ill-advised move by the council has come with extra costs for commuters who now have to fork out extra money to get into town after being dropped off from far-away places such as Rotten Row rank, Coventry Road as well as Coca-Cola along Seke Road," the lobby group said in a statement on Thursday.
Besides the extra costs, CHRA said, the move by the council would also result in increased delays of the commuting public as some will be forced to walk long distances into town, especially given the current economic situation in the country which has seen the majority living far beyond the Poverty Datum Line (PDL). The shuttle bus services facilitated by council are charging $0, 30 cents to ferry commuters to the inner parts of the city.
CHRA lamented the decision by council was unilateral.
"Unilateral measures can only result in increased chaos while the general public will be greatly inconvenienced. Decongestion of the city will, indeed, be welcome but a decision to that effect can only be made after wide consultations with concerned stakeholders have been made.
"CHRA is of the view that an all-stakeholders approach that involves council, commuter omnibus associations as well as representatives of Harare residents (and other stakeholders) is ideal as a way of finding a way of regulating traffic flow in the CBD."
In wide-ranging interviews with omnibus drivers, NewsAnchor learnt residents were angry with being dropped-off further away from the CBD as well as the use of force by State security agencies as a way of compelling drivers to heed the council directive. LOCAL