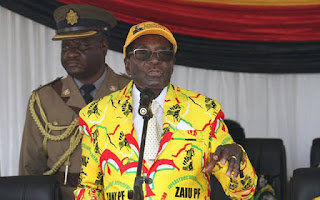 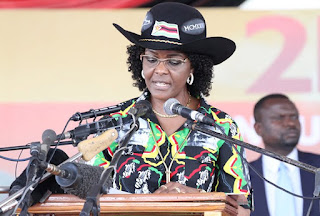 ​
BY NEWSANCHOR REPORTERS
Former President Robert Mugabe and his controversial wife, Grace (pictured), last week descended on a Banket farm which is part of their vast Gushungo Holdings business empire, where they intimidated poor farm labourers, who were protesting over unpaid wages and terminal benefits.
The rushed meeting between the ex-president and the farm workers was called by the two parties' lawyers Godfrey Sitima, representing the labourers, and Fungai Chimwamurombo, who represents the Mugabes, after the former first family got wind the workers were seeking an audience with President Emmerson Mnangagwa to help resolve the impasse.
Our news crew surreptitiously attended the meeting disguised as farm workers after being denied entry.
During the heated deliberations held at the farm, which is situated along the road to Mazvikadei Dam & Resorts in Mashonaland West province, Grace exhibited her high disregard for protocol and etiquette when she continued to heckle workers contributing to debate.
"You, shut up," she interjected unrestrained.
The former president, who was in high spirits, said he didn't owe anyone a cent before daring the workers to approach the courts. The aged ex-guerrilla leader, however, unwittingly sold out his wife who is believed to have diverted funds meant to pay the labourers.
"If anyone claims I have his or her money, aah, just go to the courts because I know I have been giving amai (Grace) your salaries all along," he told the employees.
Mugabe and his wife argue they didn't owe the labourers' terminal benefits saying their previous employer, the Agricultural Rural Development Authority (ARDA), should pay them their pensions and severance packages.
The former first couple further argued that since they now owned the farm, they had the prerogative to retain some workers if they deemed it fit.
A visibly angry Grace chided the workers not to be fooled by the fact that President Mnangagwa was now the country's leader, as the farm continued to be theirs and shall run it as they wished, including disregarding labour laws.
The Mugabes were in the company of Grace's brother, Winston Marufu, who at one time operated at the property after taking it over from his niece, Bona who had reportedly shown no interest in farming there.
The meeting failed to reach a consensus and the issue is likely to spill into the courts anytime soon.
The farm, which has changed hands several times, was formerly owned by the Nicole family, famed for being one of the most successful white commercial farmers, before being hounded out of the estate at the height of the chaotic land reform programme that started in 2000 and was taken over by ARDA. The Nicoles relocated to Zambia where they are reportedly undertaking a thriving farming venture.
The protracted fight over wages and benefits has been going-on for almost a year following Grace's attempt to evict workers from the property. The employees have vowed to stay put until they are paid their dues.
The former Zanu PF strongman, who turns 94 tomorrow, and his family reportedly own 14 farms across Zimbabwe, and new Agriculture minister Perrence Shiri has pledged to repossess the former president's farms for redistribution to deserving beneficiaries.
The Mugabes, through their security officer Mkhululi Nyoni, were last month ordered off Smithfield Farm in Mazowe, but are defiant arguing the matter was irregularly dealt with by the High Court. TOP NEWS.