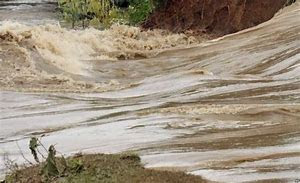 ​(File picture).
Several people, including 85 school pupils, have been left stranded in Mashonaland Central province following floods that hit some areas recently after successive days of rains.
The 85 pupils from Zingore Primary School in Mt Darwin, have been marooned at the school since Monday after Donga River burst its banks and flooded the area.
In Muzarabani, 31 huts and 34 Blair toilets were destroyed by the incessant rains that have been pounding the flood-prone area for the past two weeks.
In the Glendale area of Mazowe District, several houses were last week flooded with water mixed with sewage due to a poor drainage system. Also in Domboshava, Mashonaland East province, several houses were destroyed following heavy down pours that characterised the better part of last week.
Principal administrative officer in the Ministry of Local Government, Public Works and National Housing in Mashonaland Central, Ivan Kanerusine, confirmed the development in an interview.
He said the affected pupils at Zingore Primary School could not cross Donga River on their way home after school and had to return to the school where they were accommodated on Monday.
"We have been in touch with the Mt Darwin Civil Protection Committee who advised that 56 pupils out of the 85 are still being housed at the school as of today (yesterday)," he said. "Some of them are now being housed in surrounding communities. The committee is mobilising the necessary food and other necessities to cater for the welfare of the affected pupils."
Kanerusine said in Ward 5, Kapembere area of Muzarabani, 31 huts and 34 Blair toilets were destroyed by the rains, which also destroyed some crops.
"No loss of lives was reported in the area, but the incessant rains have left a trail of destruction," he said. "Crops were destroyed and we are now appealing for food aid to assist the affected families. Some of the families' reserved foodstuffs were also affected when the rains damaged the huts.
"We have been in touch with the families and some of them requested to be assisted with seed maize and sorghum seed, but if we look at the time left before the end of the rainy season, the crops might not reach maturity."
In Rushinga District, seven gold panners were marooned at the confluence of Mazowe and Nyadire rivers from February 4 to 5.
"The seven were marooned on February 4 and spent the whole night there," said Kanerusine. "They were rescued the following day towards sunset after they realised that the flooded rivers were not subsiding.
"They managed to contact the area's local councillor who conveyed the message to the district civil protection committee. Local resources were mobilised and five of them were rescued using ropes. A father and his son spent a night marooned and were only rescued the following morning."
Kanerusine said Muzarabani and Mbire districts were usually affected by floods almost every year and they had been having awareness campaigns in the areas.-Online. LOCAL