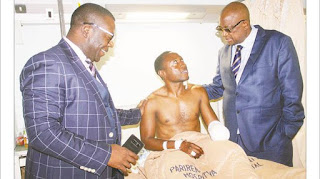 ​Zvirekwi talks to Chiyangwa from his hospital bed while Guzah looks on
CAPS United captain Hardlife Zvirekwi says he is determined to fight hard and make a return to football despite having part of his left arm amputated following injuries sustained in a horror car crash in Harare in the early hours of Monday morning.
The Zimbabwe international told ZIFA boss Philip Chiyangwa, who visited him at Parirenyatwa Hospital yesterday, he had not given up on continuing with his career as a professional footballer. Despite the serious injuries he sustained, Zvirekwi was in good spirits when Chiyangwa visited him in the company of Makonde West legislator Keith Guzah, who is a former Dynamos secretary-general.
The CAPS United skipper, who faces a lengthy period on the sidelines and has had to be removed from the Harare giants' initial squad list at PSL, thanked the nation for the outpouring of support he has been receiving since news of his accident went viral on social media.-Online. SPORTS.