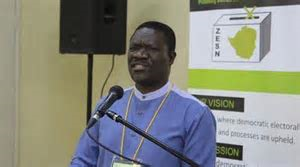 BY NEWSANCHOR REPORTER
The umbrella body representing civic society organisations, Crisis in Zimbabwe Coalition (CiZC), has raised grave concern over the recent appointment of a former soldier to head the Zimbabwe Electoral Commission (ZEC) as the country prepares for make-or-break harmonised polls mid-year.
In a statement CiZC described the appointment of Utoile Silaigwana as ZEC acting chief elections officer as a heavy blow to the possibility of Zimbabwe holding a peaceful, free and fair plebiscite on the back of the consolidation of militarisation of the institution.
"As CiZC, we would like to categorically state that the appointment of Silaigwana is another unfortunate incident which continues to put into doubt the credibility of ZEC through acts of brazen militarisation," said Tabani Moyo, CiZC spokesperson.
Silaigwana, a former member of the Zimbabwe National Army (ZNA), was part of the 2008 ZEC secretariat that withheld the March 2008 election results for close to a month, the lobby grouping alleged.
"It must also be noted that he was appointed to ZEC when he was still a serving member of the ZNA and was thus among the people that led to the militarization of ZEC and eventually presided over the 2008 elections whose outcomes were heavily contested.
"Silaigwana's image is tainted with accusations of election rigging and his latest appointment raises eyebrows on the credibility of the ZEC Secretariat and ultimately the credibility of the 2018 polls."
Further said CiZC, "It is becoming quite apparent that interim President Emmerson Mnangagwa's promise of a free, fair and credible election is mere rhetoric. Silaigwana's appointment comes after President Mnangagwa's declaration that the bloody 2008 elections, which resulted in the death of close to 300 opposition supporters were free and fair.
"To add on to this, Justice Minister, Ziyambi Ziyambi is on record saying there is no need for reforms ahead of the 2018 elections.
"CiZC would like to draw the attention of the visiting SADC Electoral Advisory Council (SEAC), which is in the country on a week-long pre-election assessment, to take note of crucial matters which might be a hindrance to free, fair and credible elections in Zimbabwe. De-militarization of ZEC as well as ensuring that ZEC secretariat is apolitical is critical to ensure free, fair and credible elections."-TOP NEWS.