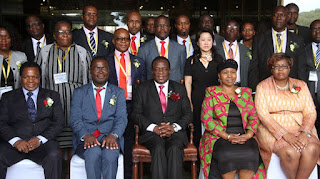 ​President Mnangagwa and delegates at the conference
President Mnangagwa has called for greater infrastructural investment at institutions of higher learning to ensure broader access to university education, and the creation of linkages and symbiotic relations among relevant stakeholders.
The President said this when he addressed delegates attending a Higher and Tertiary Education Infrastructure Investment Conference in Harare who included academia, investors, bankers, student leaders and foreign investors who pledged their commitment to work with the new administration.
He urged prospective local and foreign investors to take advantage of the new dispensation's "open-door" business policy and invest in educational infrastructure.
"We need to prioritise infrastructure investment at colleges and universities for future generations to produce well-rounded graduates for the global market," said President Mnangagwa who is also the Chancellor for State universities.
He said windows of investment opportunities were plenty via private sector participation under build, operate and transfer, build, operate, own and transfer arrangements and public-private sector partnerships.
"Zimbabwe remained competitive on the global market as our education system has continued to produce skilled human resources relevant to local and global demands," said President Mnangagwa.
"Sadly, however, the requisite infrastructure in the education sector has of late been overstretched due to a combination of factors such as a marked increase in demand coupled with years of stagnant development due to limited resources and lack of fiscal space."
President Mnangagwa said the Government's thrust was to build state-of-the-art lecture theatres, lecture rooms, well equipped laboratories and resourced libraries, decent accommodation, cafeterias, along with modern sporting and recreational facilities.
"Investments in infrastructure which facilitates universities to become centres of technological incubation, innovation, inventions, research and development, should be encouraged," he said.
"This will help to train and groom a highly qualified and skilled workforce able to invent and produce proudly Zimbabwean products which are competitive in regional and global markets."
He said there was need for flexible and affordable student loan financing to prevent many deserving learners from ending their academic journey prematurely.
"I thus exhort all stakeholders and beneficiaries of the education sector to deliberately develop innovative, responsive and relevant credit facilities to ensure holistic graduates emerge from our learning institutions," he said.
The President also challenged the corporate world to equally play their role to increase access to higher education by offering scholarships and work-related learning opportunities.
The economic potential of universities, he said, went beyond individual campuses as their influence and impact transcended to surrounding communities that often result in the growth of university towns and cities.
"In this regard, Government stands ready to support the establishment of university towns as this increases economic activity, creates employment and enhances development outcomes whilst broadening the infrastructure base in surrounding communities," he said.
At a consultative meeting held in January this year with vice chancellors and heads of higher and tertiary institutions, President Mnangagwa challenged institutions of higher learning to explore collaborative synergies and partnerships towards the sustainable economic development of the country.
President Mnangagwa said he envisaged Zimbabwe becoming a prosperous, growing and middle income country by 2030 propelled by increased investment.
"To achieve this vision, our focus is on modernisation, mechanisation and increased productivity across all sectors," he said.
"You as institutions of higher learning have an important role to play in building a Zimbabwe we can all be proud of."
President Mnangagwa, who has interacted with a cross section of Zimbabweans in the Diaspora, said he was humbled by their enthusiasm and show of patriotism. He appealed to those in the Diaspora to use the knowledge and skills they have acquired to come and invest in the rebuilding of the country.
"My Government is willing to provide the necessary incentives and support for such investment to take place," he said.
He also urged the country's experts in the Diaspora to partner with Government ministries, departments and agencies to address skills deficits in all sectors of the economy.
Higher and Tertiary Education and Technology Development Minister Professor Amon Murwira said his ministry's focus was to produce graduates who produce goods and services.
"Knowledge which cannot be transformed into goods and services is not relevant at all," said Prof Murwira.
He said it was his ministry's vision to have university towns and cities. Prof Murwira said he viewed universities as revenue centres and not cost centres for Government, which he said was currently the case.
"We must take advantage of high literacy to bring in foreign direct investment through offering high quality education that has a product and service orientation," he said.
He also emphasised that Government respects property rights and urged the construction sector to make use of opportunities provided by the need for requisite infrastructure at institutions of higher learning.
The high-level conference provided financial institutions partnering the ministry an opportunity to make presentations on the funding models and options for tertiary intuitions.
Universities and college representatives also outlined their infrastructural requirements such as modern libraries, lecture rooms, early childhood development blocks, clinics, modern sporting facilities and students and staff accommodation.-Online. EDUCATION.