Home » Top » Mugabe hounded me out of Zanu PF: Chombo

Mugabe hounded me out of Zanu PF: Chombo 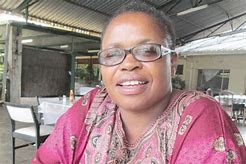 ​Marian Chombo
…As her return sparks anxiety in Zvimba North
BY NEWSANCHOR REPORTERS
Marian Chombo, estranged wife of former Home Affairs minister Ignatius Chombo, alleges she was kicked-out of Zanu PF at the behest of ex-president Robert Mugabe and never quit voluntarily.
She hit out at Mugabe for unashamedly ganging up with her ex-husband to hound her out of the revolutionary party. Ignatius, alongside other G40 kingpins who included ex-ministers Saviour Kasukuwere, Jonathan Moyo and Patrick Zhuwawo, were later expelled from Zanu PF at the height of the cleansing of remnants of the divisive cabal accused of State capture.
Marian, who was recently readmitted into Zanu PF, told this newspaper she was happy to be back in the party.
In an interview at Chikeya in Zvimba, Marian said she was relieved to have been readmitted as her roots were founded in Zanu PF, a party through which she contributed to the country's liberation struggle as a war collaborator, and was ready to serve in any post.
"Firstly, I am happy that I am back in the party. However, I want to state that I never left Zanu PF on my own volition but I was pushed out by former President Mugabe. I'm sure everyone heard Mugabe saying it out during a rally in Chinhoyi and that's when I joined Joice Mujuru (of the Zimbabwe People First then) since we shared liberation history, but my heart was always with Zanu PF," said Marian.
Quizzed if she was eyeing any seat in the forthcoming general elections, the computer engineer-turned-politician said she was ready to serve the party in any capacity that helps uplift the people's welfare.
"I think the people at the grassroots are better positioned to decide if I should serve them at any level they see fit. I am ready to serve in any position if the people choose that I serve them. Remember our president (Emmerson Mnangagwa) believes that the people's voice is the voice of God. It is the ordinary person who will decide who they choose to lead them," said Marian, a firm favourite politician in Zvimba North where she used Ignatius' influence and wealth to make in-roads through philanthropic work.
She further elaborated, "Right now I am not worried about having a position as that is for the people to decide. My focus right now is that we unite the party and join hands in campaigning for our president so that he wins the 2018 elections resoundingly so he can continue to open up our country for economic growth."
In the 2013 polls, Marian contested in Zvimba North constituency against her former husband in Zanu PF primaries before she was expelled for defying a directive to abstain from running. She then stood on a People First ticket and narrowly lost, amid claims of vote-rigging and intimidation by her then powerful ex-husband when it seemed highly likely she would romp to victory.
Marian's return into the Zanu PF fold has heightened speculation she could run for MP and scuttle the hopes of other aspiring candidates vying for the seat left vacant following Ignatius' recent expulsion from the party.
Jostling has kicked off with fierce contenders in the likes of Idah Kamushinda, Theresa Xhochiwe Maburutse, former Mashonaland West provincial administrator Christopher Shumba (now principal director in the Local Government ministry), Dolly Tamanikwa and youthful Goodluck Mbiri. TOP NEWS.