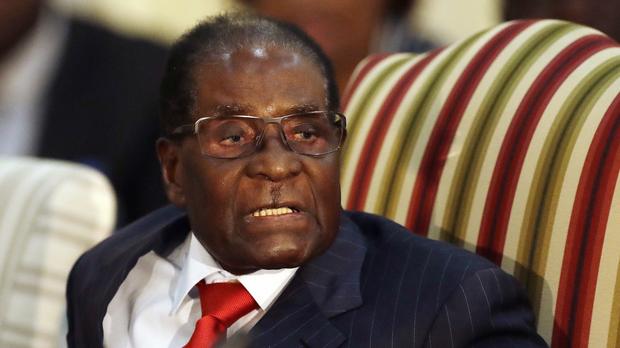 ​Ex-president Robert Mugabe sneaked out to SA amid suspicion of a Mnangagwa plot
Former Zimbabwean president Robert Mugabe yesterday sneaked out and made his first trip to South Africa since stepping down after a military coup last year that resulted in an abrupt end to his 37-year reign.
Former first lady, Grace, who is a wanted person in the neighbouring country, was conspicuous by her absence from the entourage that accompanied the 94-year-old ex-Zanu PF party strongman. Grace bashed a model, Gabrielle Engels, whom she found partying with her sons in hotel room.
Mugabe has courted the ire of incumbent President Emmerson Mnangagwa after it emerged he is pushing for consolidation of a splinter party christened National Patriotic Front (NPF), whose interim leader is Retired Brigadier-General Ambrose Mutinhiri. NPF plots to divide the Zanu PF party to further weaken Mnangagwa's chances of romping to victory in the upcoming 2018 elections in which he faces tough challenge from MDC Alliance's Nelson Chamisa.
Travelling as an ordinary citizen on a flight from Zimbabwe destined for OR Tambo International Airport in Johannesburg, the former Zanu-PF leader was accompanied by about eight guards and a woman believed to be a nurse.
"One of the guards was on the phone talking about 'colleagues from Pretoria', a passenger who was on the same flight said.
Mugabe's purpose of visit could not be independently verified, although speculation has it he could be flying out to meet renegade G40 kingpins, Jonathan Moyo, Saviour Kasukuwere and Patrick Zhuwawo who last November skipped the borders and went into self-imposed exile when the Zimbabwean military unleashed armed soldiers on the cabal accused of State capture.
It is also rumoured Mugabe is in SA to visit his sons, Robert Junior and Chatunga Bellarmine, who are domiciled there, as well as to hold meetings with some of his long-time supporters.
The passenger on the flight also revealed that take-off had been delayed for unspecified reasons.
"The plane was supposed to leave Harare at 7am. We only boarded at 10am. No reasons were given. When we were to take-off the captain announced that 'former president RG Mugabe' was on board," he said.
The national Department of International Relations and Co-operation spokesperson, Ndivhuwo Mabaya, did not respond to requests for comment.
Addressing Zanu PF youths at the party's headquarters yesterday, Mnangagwa reiterated Mugabe's shenanigans and State destabilisation agenda were under the spotlight and would punish the nonagenarian if it was proved he intends the upstage the constitutional order that led to his ascendancy.
It was not clear whether Mnangagwa's intelligence was aware of Mugabe's trip and why he was visiting the neighbouring country.
"It is the timing of the visit which raises eyebrows. Mugabe has just anointed Mutinhiri and now he has gone to meet the G40 renegades who are holed up in SA to plot Mnangagwa's last days," posited Elliot Mafuriranwa, a Harare-based political commentator. -The SA Star/ James Muonwa.-TOP NEWS.