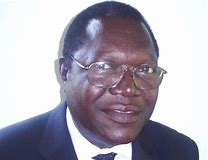 ​Retired Brig-Gen Ambrose Mutinhiri
FORMER Zipra combatants have dismissed Retired Brigadier-General Ambrose Mutinhiri, who was thrust to the leadership of the former first family's political project dubbed the New Patriotic Front, as a sellout, who took a sabbatical from the liberation struggle over petty grievances.
Mutinhiri, who was touted as a possible contender for the vice presidency of Zimbabwe, has served as Member of Parliament for Marondera West and previously worked as Zimbabwe's ambassador to Yugoslavia, and was a founder member of the military wing of ZAPU.
Mutinhiri was last week 'anointed' by former president Robert Mugabe to lead the new formation to scuttle current President Emmerson Mnangagwa's chances of winning the watershed elections this year.
Rtd Brig-Gen Mutinhiri was reportedly miffed after failing to assume command of Zipra ahead of Lookout Masuku.
Speaking to ZBCNews, Headman Moyo said at Independence in 1980 Rtd Brig-Gen Mutinhiri was just an ordinary man staying in Makene, Lusaka, Zambia after taking a sabbatical from the war.
"It is not proper for people to say Zipra short-changed Ambrose, he was no longer in the structures of Zipra. His position as chief of staff and deputy commander was not filled after he took a sabbatical. There is only one appointment that was done by the War Council, that was for Lookout Masuku,'' said Headman Moyo.
He, however, said Rtd Brig-Gen Mutinhiri and former president Mugabe were brothers, hence, his G40 activities were in the service of his brother.
"Bearing in mind that him and the former president are close, they are actually related. Their mothers were cousins, I know that for certain because to me Mutinhiri is like a brother. So he has taken a decision to work with his brother," Moyo said.
Another Zipra combatant, Freddy Mutanda said it was unfortunate that Rtd Brig-General Mutinhiri was blind to the fact that he was being used to further an abortive agenda.
"That's part of a G40 extension. That's the G40 we have been talking about. That's the G40 we have been saying is active on the ground. There it is sprouting with Ambrose, but its unfortunate that Ambrose is being used to propel the G40 agenda,'' he said.
Turning to another G40 kingpin, former vice president Phelekezela Mphoko who, like Rtd Brig-General Mutinhiri, also took a sabbatical from the war to marry his wife Laurinda in Maputo; Moyo said as former Zipra combatants they had long made moves to have Mphoko recalled from the office of vice president for his G40 activities.-Online-LOCAL NEWS.