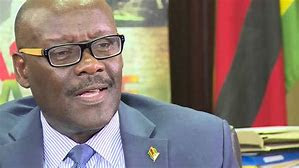 ​Health and Child Care minister David Parirenyatwa
BY JAMES MUONWA
The continuing strike by junior doctors which has entered Day 15 today has caused numerous deaths and untold suffering to patients across the country, amid calls by the affected medics for the resignation of Health and Child Care minister, David Parirenyatwa, from his post for failing to resolve their grievances.
The situation at various State-run hospitals such as Harare Central, Parirenyatwa, Mpilo, Gweru, Mutare and Chinhoyi Provincial, and clinics across Zimbabwe is reportedly dire, with reports some sick patients were dying without being attended to.
The Zimbabwe Hospital Doctors Association (ZHDA) on Tuesday accused Parirenyatwa of arrogance and lethargy to resolve their dispute over low salaries and allowances, which resulted in them downing tools a fortnight ago.
Failure of Parirenyatwa resigning, doctors demand that President Emmerson Mnangagwa immediately axes and replace him with a fresh pair of hands capable of resolving issues that have continued to throw doctors and other health professionals on the edge of strikes over the last decade. The Health minister is one of the few who served in former president Robert Mugabe's Cabinet and were re-appointed by Mnangagwa following last November's soft 'coup'.
The ZHDA says the minister and members of the Health Services Board have not been forthcoming to fix issues raised by the ZHDA members to date. Instead, the association alleges, they have engaged in deliberate misinformation of the public using State media and resorted to a failed strategy of issuing legally void threats to the striking doctors.
"This in our view is a sign of failure and must be immediately followed by resignation of the entire Health Services Board and the Minister of Health," a statement issued by the body read.
"We note with concern the closure of almost all central hospitals, children's units, provincial hospitals and cessation of emergency life-saving procedures throughout the country. We place this failure directly on the heels of Dr Parirenyatwa and the Health Services Board who have shown disinterest and lack of urgency in resolving the demands of the striking doctors.
"The ZHDA leadership is only mandated to call off the doctor's strike after consultation and agreement with its members. Any pronunciations by the HSB, Minister of Health or other affiliate health associations are of no effect to the striking doctors. Any other strikes by other associations such as nurses or paramedics are not in any way linked to the doctors demands and no blanket negotiations or conflation of the separate demands will be entertained. Any manoeuvres to the contrary or insinuations by other health associations will not be tolerated."
The statement came as nurses and other medics threatened to join the strike in solidarity with doctors who earn a lowly $400 per month, a far cry of what others in the SADC region are paid.
The ZHDA said it was recalling all doctors that had been instructed to remain at their stations to attend to emergency cases.
"This in effect implies that from tomorrow, day 14 of the strike all consultants, registrars, district medical officers and general medical officers are now formally joining the strike. We will only return to work when all issues raised by the ZHDA have been fully resolved. We urge all Zimbabweans to pray for us as we try to restore sanity, dignity and nobility of the medical profession," said ZHDA. TOP NEWS.