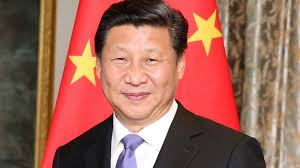 ​President Xi
BY LEO CENDROWICZ
The news that China has removed the term limits that prevent President Xi Jinping from clinging to power indefinitely, will alarm anyone with a sense of history.
From Julius Caesar to the fascists of the 20th century, the experience seems to be that one-man rule rarely ends well. Mr Xi's power grab is being sold as something different. Chinese officials say that allowing him to stay in power beyond 2023 is the best way to ensure the continuity the nation requires to face a raft of political and economic challenges.
They include rising threats to the economy, a growing divide between urban and rural incomes and a growing list of environmental challenges. In the words of the state-controlled newspaper China Daily, the lifting of the presidential term limit was needed "to perfect the party and the state leadership system".
The proposal still has to be passed by delegates of the National People's Congress at their annual meeting that begins on Monday. But that is considered little more than a rubber stamp. "It means that Xi intends to stay around for some time," says Kerry Brown, director of the Lau China Institute at King's College London.
"But it also raises the question of how workable single leadership will be, and what might happen after this era ."
The move should not have come as a surprise. When Mr Xi was re-elected president and party chief for a second term at last October's Communist Party Congress, he failed to nominate a clear successor.
At the same time, his ideology was stamped into the party's charter, which was amended to include "Xi Jinping Thought on Socialism with Chinese Characteristics for a New Era".
Reform and crackdowns Mr Xi is the son of one of the Communist Party's founding fathers. Born in 1953, he joined the party in 1974, climbing its ranks before assuming the leadership in 2013. His administration has overseen economic reform, taken a much tougher line against corruption and cracked down hard on human rights.
He has pursued a more assertive foreign policy and launched massive infrastructure programmes. The tradition of limiting presidencies to 10 years emerged in the 1990s, when veteran leader Deng Xiaoping sought to avoid a repeat of the chaos that had marked the era of Mao Tse-tung. For the past two decades, China could point to collective leadership and the smooth succession from one leader to another as signs that it had defied the trap of dictatorship.
The move to centralise so much authority in one person should be the antithesis of its commitment to collective leadership. Mr Xi controls the main pillars of the Chinese state – the party, the government and the military. In 2016 he was granted a special status by his party when he was anointed "Core Leader".
The following year he was recognised as the Communist party's lingxiu – a reverential term for "leader". Punishing critics After gently pulling back under Mr Xi's predecessors, the Chinese propaganda machine has roared back into life over the past five years.
The President's virtues are hailed at every opportunity and any insult is punished severely. In some sense, the West might be enabling Mr Xi. Reaction from Europe and America has been muted, despite perennial grumbles about democracy and human rights. For the US, China is an essential ally in global flashpoints such as North Korea. For the EU, it has become an unlikely beacon of stability on issues such as free trade and efforts to tackle climate change. But despite the apparent concentration of his power, Mr Xi has not dispelled concerns about his leadership.
"This consolidation of power might, in the short run, accelerate the reforms and help the country," says Diego Gilardoni, the author of Decoding China. "But, in the long run, an excessive concentration of power that doesn't allow for renewal will suffocate the efforts to adapt China to the 21st-century's challenges." Who will stand up to Xi?
For all of the misgivings about Mr Xi's power grab, even his harshest critics admit he is not impulsive, hot-headed or irrational. But there are deeper concerns about whether undermining collective rule will stifle the voices needed to challenge any potential missteps.
The key question is: who will dare speak truth to Mr Xi? "A longer period at the top does not necessarily mean stronger control," says Tim Summers, a senior fellow at Chatham House and a lecturer at the Centre for China Studies at The Chinese University of Hong Kong.
"The impact is going to be felt mostly in economic and social terms with Chinese companies going global. That is the real basis for China's global influence, not the proclivities of its leader."-OPINION.