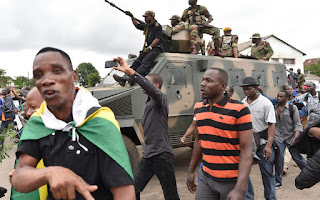 ​A scene during the November military intervention in Zimbabwe

BY JAMES MUONWA
Zimbabweans from the political divide do not want the country to come under military rule, but have expressed confidence in the army's diligence in executing military duties as enshrined in the Constitution, a recent survey has indicated.
Effectively, citizens are saying soldiers must stay in the barracks.
Results of a recent study by Afrobarometre released on Tuesday (20 March) showed widespread public trust in the army among people from different age groups, localities, gender, educational backgrounds and political affiliation.
However, citizens said they feared voicing their dissent over the army's short-comings and excesses, while it was clear they rejected, outright, military rule as an option for Zimbabwe.
"Citizens think the army is generally capable of protecting the county from external and internal security threats, but there is substantial scepticism about soldiers' training, equipment, professionalism, and respect for citizens' rights.
"Afrobarometer survey data collected in early 2017, months before the unexpected events of November, show considerable public trust in the army, but also fear of criticising the army along with a clear rejection of military rule as an option for Zimbabwe," reads the report.
Zanu PF interviewees (86%) said they had trust in the army in doing its work while 41% interviewees reportedly aligned to main opposition MDC-T said of the same. Other socio-demographics sampled were rural (68%) and urban (58%); women (65%) and men (63%).
Afrobarometre is a pan-Afican series of national public attitude survey on democracy, governance, and society conducted by Ghana-based Centre for Democratic Development.
Further reads the publication, "The role and capacities of the military are critical elements of a modern state. In functional democracies, the military's institutional boundaries are tightly prescribed, excluding it from the political arena. It must be both trusted and adequately resourced to effectively discharge its mandate of protecting the country from external and internal threats.
"Recent events in Zimbabwe thrust the military into a bright spotlight. For the first time since independence in 1980, Zimbabwe in November 2017 experienced overt military intrusion into the country's politics. While denying that it was taking over the government, the military stepped into protracted wrangling over possible succession to long-time President Robert Mugabe, in a series of dramatic events that culminated in Mugabe's resignation (Al Amir, 2017; International Crisis Group, 2017).
"This expansion of the military role into the civilian political domain occurred in the context of an army that is historically and organically tied to the ruling Zimbabwe African National Union-Patriotic Front (ZANU-PF) party but is also bound by the Constitution (2013) to avoid all involvement in partisan politics, as stated in Clause 208: Neither the security services nor any of their members may, in the exercise of their functions: act in a partisan manner; further the interests of any political party or cause;  prejudice the lawful interests of any political party or cause; or violate the fundamental rights or freedoms of any person."
Mugabe's successor, President Emmerson Mnangagwa has recently come under heavy criticism for consolidating the 'militarisation' of the State by staffing key institutions with serving and retired soldiers, including the elections management body, the Zimbabwe Electoral Commission (ZEC).
Ironically, Mugabe and civic society organisations have led the condemnation of the role of the army in last November's soft coup that culminated in Mugabe's resignation after 37 years of uninterrupted rule. TOP NEWS.