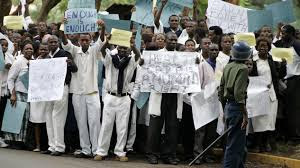 ​
BY NEWSANCHOR REPORTER
Nurses at public hospitals and clinics on Monday staged a job strike over poor pay and working conditions, amid government non-action to address their plight.
Zimbabwe Nurses' Association (Zina) president Simangaliso Mafa said they had no choice, but to go on strike after government ignored their 14-day ultimatum, which lapsed on Sunday.
"We met with the government on Sunday and we did not agree on some issues, therefore, we are going to meet them again and see if we can come to a mutual agreement," she said.
Zina secretary-general, Enock Dongo said they will only return to work after their demands have been met.
A survey by NewsAnchor across the country established most nurses at public health facilities reported for work but were not attending to patients, while at other stations staffers staged peaceful demonstrations to press the government of President Emmerson Mnangagwa to fix their worries.
Government has exhorted striking nurses to go back to work without any further delay to allow it time to work on their grievances.
In a statement yesterday, Health and Child Care Minister Dr David Parirenyatwa, who said Government has acknowledged the nurses' grievances as "genuine and valid", noted that the Ministry of Finance and Economic Development had since been instructed to look into the financial implications of the demands.
"Following representations by the nursing staff through Zimbabwe Nurses Association (ZINA), Government and the Health Services Board, Government has acknowledged the nurses' grievances as genuine and valid and thus requiring urgent attention," he said.
"Government has since instructed Treasury to look into the financial implications of the nurses demands, with a view to resolving them amicably.
"In light of this major concession by Government, which has been made against well-known economic challenges facing our nation, in the interest of patients, and in order to avert any loss of life through disruption of essential services, the reasons for calling for the industrial action no longer obtain."
Some nurses went on strike yesterday even though the law prohibits them from embarking on industrial action as they provide essential services.
Government, which appealed to the nurses to call off their industrial action to make way for harmonious industrial relations, also said it would take disciplinary action against nurses who failed to report for duty.
The nurses' strike follows hot on the heels of yet another one by junior doctors who downed tools last month over poor conditions of service.-TOP NEWS