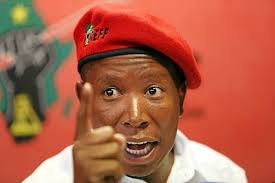 EFF president Julius Malema
JOHANNESBURG. — EFF leader Julius Malema has denied allegations that he was involved in an assault at the Fourways Memorial Park, where Winnie Madikizela-Mandela was buried.
Winnie died on April 2 and was buried at the weekend.
"I wouldn't do that," Malema told News24 when asked about claims that he had been involved in a scuffle with a policeman after being denied entry to the park for the burial on Saturday.
"I never pushed anyone; I have got protectors…Our car had full accreditation and I had full accreditation."
The SowetanLive website reported that Malema, as well as the Economic Freedom Fighters' Mbuyiseni Ndlozi and Floyd Shivambu, were initially denied entry to the site.
According to the website, Malema told a soldier that "no white man can stop me", when they were reportedly denied entry to the park.
Another report said that the comment was allegedly made to a policeman.
Photographs published on the SowetanLive website show Malema pointing at an official. In another photograph, an officer appears to put a hand out in front of Malema as he seems to be moving forward.
There appear to be soldiers, police, military police and security officers in the vicinity.
Police spokesperson, Brigadier Mathapelo Peters confirmed to News24 that a common assault case had been opened at the Douglasdale Police Station.
However, she was unable to provide further details, and it was not immediately clear if that case is linked to the alleged incident at the burial site. — News24. INTERNATIONAL.