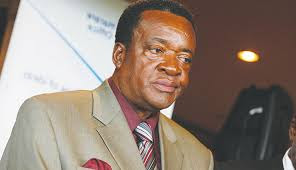 BY NEWSANCHOR REPORTER
Minister of State for Provincial Affairs for Mashonaland West Webster Shamu today narrowly escaped death after the vehicle he was travelling in was hit by an overtaking car.
The incident occurred at the 10km peg just outside Banket along the Harare-Chirundu highway.
Shamu, who was being chauffeured enroute to Harare, escaped unhurt although his black Land Cruiser V8 was slightly damaged.
According to eyewitnesses, the accident happened when the driver of a Toyota Sienta tried to overtake the minister's car but attempted to return to his lane on seeing an oncoming car to avoid a head-on collision, while closely behind there was a trailing haulage truck.
"The driver of the overloaded Toyota Sienta which was ferrying 11 passengers to Mupandaguta farm tried to overtake and swerved back to the left lane to avoid a head-on collision after noticing an on-coming vehicle. He could not slow down as a haulage truck was following too close behind, forcing him to swerve off the road before steering the car back on the road where he rammed into the Land Cruiser's left back passenger door," said an onlooker.
Shamu reportedly confronted the unidentified 7-seater Toyota Sienta driver before taking him to Banket Police Station where the matter was reported.
Efforts to get comment from Mashonaland West police spokesperson, Inspector Clemence Mabgweazara were fruitless.
Shamu requested permission from the police officers to proceed with his journey to Harare while the Sienta driver was detained.
"I am surprised overloaded cars are passing through police roadblocks while passengers are packed like sardines," said Shamu, before driving off.
Shamu, who has previously served as the powerful Zanu PF national political commissar as well as Information minister, is one of the few ministers who served in former president Robert Mugabe's Cabinet and were retained by incumbent President Emmerson Mnangagwa.
The minister, infamous for likening Mugabe with premier powdered milk formula Cremora, is reportedly unpopular with a faction loyal to Mnangagwa who believe he should be chopped for aligning with the deposed nonagenarian.
Shamu, who is Chegutu East MP, faces challenge from youth league leader Vengai Musengi in the impending Zanu PF primary polls. The timing of the accident is ominous if history of deaths in the party are anything to go by, analysts have noted. TOP NEWS.