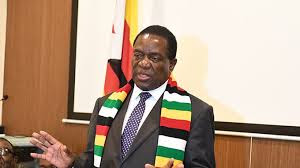 President Mnangagwa
President Mnangagwa has declared over the two-decades-long quarrel with the United Kingdom, stressing his administration prefers dialogue with all nations in place of acrimony. He said his re-engagement policy thrust was succeeding as Zimbabwe had managed to attract investment commitments of nearly $11 billion in the past four months.
President Mnangagwa said this yesterday while addressing Johane Masowe YeChishanu Vadzidzi VaJesu Church pilgrims from across Africa at their Madziva Shrine, Mashonaland Central Province.
He said Zimbabwe could not continue living in isolation and had thus managed to thaw relations with most Western countries, adding the bilateral dispute with Britain was now over.
"We have opened our doors to old and new friends. We cannot continue living in isolation. We need foreign investment, as well as those countries' technical expertise," President Mnangagwa said.
"Our quarrel with Britain is over. It was hinged on the land reform. We distributed our own land here. The land did not belong to the British, but to us Zimbabweans. So far, I have received three envoys from Britain, while we have had delegations from Western countries paying courtesy calls on us," said President Mnangagwa.
The Head of State and Government said it was now time to address economic challenges affecting the nation.
The President commented on the recent industrial action by nurses at public health institutions which he said was callous as it risked patients' lives.
He said the nurses were fired after they spurned Government's offer although they had now reapplied for re-engagement.
"I think you are aware of the recent nurses' strike where they chose to sacrifice people's lives for selfish reasons. We engaged them in dialogue, but they opted to sleep at their respective homes," said the President.-Online. TOP NEWS.