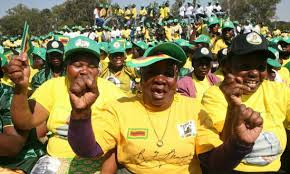 ​
BY NEWSANCHOR REPORTERS
Processes ahead of this weekend's internal elections to choose candidates to represent the revolutionary party in the upcoming 2018 harmonised polls, have left Zanu PF Mashonaland West further divided amid claims of bribery, imposition and wanton disqualification of deserving candidates.
Tempers flared during a heated provincial coordinating committee (PCC) meeting held in Chinhoyi on Monday where several candidates,  whose curriculum vitae (CVs) were rejected by the party, complained of cronyism, bribery and manipulation of the candidates vetting and selection process.
Some accused the provincial leadership of receiving money from undeserving candidates who were imposed even if they did not meet the minimum requirements.
"The entire process lacks transparency as some of our CVs were never submitted to the national elections directorate for final vetting, we suspect they were thrown out by the provincial leadership while others paid money to have theirs endorsed," said one disgruntled candidate.
One aspiring candidate identified as Carryon Bure was singled out for an attack amid allegations he was a crony of Provincial Affairs minister Webster Shamu, who also came under a barrage of criticism for furthering the G40 cabal's agenda. Party members called for Shamu's immediate censure over what they termed "divisive and dictatorial tendencies."
Said Tommy Mwanza, provincial security secretary, "Shamu should be stopped from contesting in the primary elections to pave way for an investigation that he is pushing ahead the G40 agenda and that he has links with the cabal. He is the trouble-causer in the province as he is bringing his people to stand when they do not meet the criteria and are not in the structures."
Presidential adviser Christopher Mutsvangwa, who was in attendance, said he would advise the Zanu PF Politburo of the problems bedevilling the province ahead of the internal polls slated for this weekend. He said he would also ensure Shamu's matter was discussed and dealt with.
Mutsvangwa urged Zanu PF supporters to be on guard against remnants of the G40 putschist grouping scheming the downfall of President Emmerson Mnangagwa's government.
During the meeting, it was recommended that Mutsvangwa gets a bye in the Norton primaries and stand chosen unopposed as the party candidate.
Meanwhile, embattled former Mines minister Walter Chidhakwa's CV was rejected effectively ending his political career as a lawmaker. His Parliamentary seat is now up for grabs with top contenders being ZIFA president and property mogul Phillip Chiyangwa, former provincial commissar Chrispen 'Kadhoza' Saidi, Jessica Tapfumaneyi and Zandile Maseko.
In Zvimba North constituency, Marian Chombo will battle it out against 13 other candidates for the seat that fell vacant following the ouster from the party of her ex-husband, former Home Affairs minister and party national Administration secretary, Ignatius Chombo.
If allowed to contest, Shamu will face provincial youth league chairman Vengayi Musengi in the race to represent the revolutionary party in Chegutu East. LOCAL NEWS.