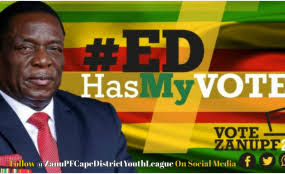 ​
The final Zanu PF 2018 election blue-print has been presented to the party's highest decision making body outside congress, the Politburo, which held its the 308th ordinary session at the party headquarters in Harare recently.
The election manifesto will be launched by the party's First Secretary and President, Emmerson Mnangagwa at a date to be announced in due course.
Briefing journalists after the meeting, Zanu PF Secretary for Information and Publicity, Simon Khaya Moyo said the party's National Chairperson, Oppah Muchinguri-Kashiri presented to the Politburo an updated report on the party regalia and a comprehensive report on the Zanu PF election manifesto for the harmonised election.
"This is the final edition of the 2018 people's manifesto which will be launched at the party headquarters at a date to be announced. The National Political Commissar, Retired Lieutenant General Engelbert Rugeje gave a comprehensive report encompassing presidential tours, Chitepo School of Ideology activities, the biometric voter registration statistics, cell verification programme and an update on the preparation towards holding of primary elections," said Khaya Moyo.
According to Khaya Moyo, the Secretary for External Relations, Simbarashe Mumbengegwi gave a detailed report on behalf of the Minister of Foreign Affairs, Retired Lieutenant General Sibusiso Moyo on President Mnangagwa's state visit to China.
"It was a remarkable and most rewarding visit covering the political and economic spheres. Because of excellent relations that exist between the two counties, the two heads of state agreed to elevate relations from all-weather status to a comprehensive strategic partnership status. A number of agreements were signed during the visit as well as memoranda of understanding.
"His Excellency President Mnangagwa also met the Chinese Premier and many other leaders both from the Communist Party of China and in government and visited a number of industries. He also met Zimbabwean students and professionals, that is the diaspora community resident in China," added Khaya Moyo.
The Politburo did not discuss the curricula vitae (CVs) for aspiring Zanu PF local government, National Assembly and Senate candidates because some provinces have not yet submitted the CVs.
"It is an exercise still in progress and not all the provinces have submitted and hopefully by the end of the week, all submissions will be in, so there is no way we could discuss other provinces and leave out others. We hope as soon as they are in, definitely we will meet as a Politburo and get submissions from the Elections Commission. It should not take long," confirmed Khaya Moyo.
He also said another Politburo meeting is likely to be held next week to deliberate on the CVs.-Online. TOP NEWS.