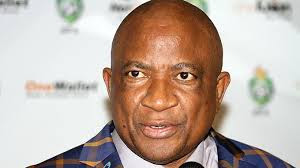 ZIFA president Phillip Chiyangwa
...as Morocco courts Chiyangwa in 2026 World Cup bid
FORMER Nigerian football superstar Daniel Amokachi headlined a Moroccan delegation that was in the country at the weekend to present the North African country's 2026 World Cup bid to ZIFA president Philip Chiyangwa and seek Zimbabwe's support.
Morocco have launched an audacious bid to become the second African nation to host the global soccer showcase after South Africa in 2010 and have been on a campaign to garner support from around the globe.
On Saturday, the Moroccan roadshow rolled into Harare with Amokachi, an African Cup of Nations winner with the Super Eagles who has been appointed one of the ambassadors of the Moroccan World Cup bid, leading the entourage.
That the Moroccan delegation brought their bid document to Chiyangwa underscored the fact the he remains the recognised leader of the Zimbabwe game despite heightened efforts by a group of former administrators claiming that his mandate expired on March 29.
The group fronted by Trevor Carelse-Juul has been claiming that there is a leadership vacuum at ZIFA because the term of office of both the assembly and the association's board expired.
Morocco, however, also need the support of Chiyangwa in his capacity as COSAFA president as the Harare property tycoon leads the biggest zone in the Confederation of African Football with 14 countries under his belt while his influence in the international game has grown beyond his region.
Carelse-Juul and fellow former ZIFA presidents Vincent Pamire and Rafik Khan led a group of administrators who met in Harare on Thursday and set-up a committee they hoped could usurp power at ZIFA and lead the game until elections are held.
A twice-losing ZIFA presidential candidate in the last two elections in 2014 and 2015, Carelse-Juul has been the front man of the now infamous Sandton Project that has been accused of working clandestinely to try and paralyse operations at the association.
ZIFA reacted by slapping bans from football-related activities to Carelse-Juul, Pamire and Khan, former women's football administrator Eusebio Maseko before adding the trio of Leslie Gwindi, John Phiri and Fungai Chihuri who are part of the committee, to the sanctions list.
But more worryingly for ZIFA were the conflicting signals emerging from the Sports Commission where the supreme sports body's chairman Edward Siwela acted in sharp contrast to the stance taken by acting director Joseph Muchechetere on the Carelse-Juul committee.
Siwela met with members of the 11-member committee that was appointed to try and take over ZIFA under the guise of being a normalisation committee in Harare on Friday afternoon.
On the same day Muchechetere who was in Gweru, distanced the Sports Commission from the Carelse-Juul committee insisting that ZIFA had the mechanisms to deal with any leadership crisis if one emerged at the association.
"Those guys who met in Harare have a right to do so because they are football stakeholders, but it will be wrong for them to think that we are in agreement with their action.
"As SRC, we are fully aware that National Sports Associations, ZIFA included must have self-correcting mechanism and as for ZIFA, there are members to make those corrective measures. It's the members who should direct how ZIFA should be run," said Muchechetere.
He said the Sports Commission were in constant communication with ZIFA and would soon be meeting with the association over the matter.
"We are aware of what has been alleged to be ZIFA's leadership and constitutional crisis and naturally we have written to them to furnish us with what exactly is the situation and soon we must be meeting.
"We stressed, however, that they must always adhere to the tenets of their own constitution, but know that they met in December where they postponed their meeting and met again early this year, which is good as it shows that they are following their constitution, but to say we are in agreement with what transpired yesterday (Thursday), that will be wrong," said Muchechetere.
He said ZIFA remains an independent structure subservient to the Sports Commission and an affiliate of FIFA.
Muchechetere's boss, however met with the committee with Siwela's actions drawing the ire of ZIFA who last night were also questioning his motives.
ZIFA vice-president Omega Sibanda came out guns blazing and said last night that there was no provision in the association's statutes where former presidents would be the organ to deal with any problems in the game.
Sibanda said they also found it strange that after being set up, the committee "sought to resolve the problems they perceive to be in football with the Sports Commission instead of trying to engage the ZIFA leadership".
"Be that as it may, there is no provision in the ZIFA constitution for ex-presidents to intervene should there be any problem in the association. That is the duty of the assembly.
"If they thought there was problem why didn't they engage Chiyangwa, or the ZIFA board. Why didn't they write to our secretary-general and prove that they are willing to engage ZIFA directly?
"Now we are wondering what the motive of the Sports Commission chairman is by meeting people who are outside of our structures. If there was a problem at FIFA today, it would not be solved by Sepp Blatter or any of the ex-president and it is the same case with CAF, Hayatou cannot come and solve any problems in CAF now.
"In any case such people like Pamire and Khan are not eligible in terms of our constitution to intervene in football affairs because of their previous convictions by the courts of law in this country.
"Pamire did community service in Bulawayo and Khan served his time at Connemara and Carelse-Juul left the country under a cloud over the construction of the Angwa City centre building in Harare," Sibanda said.-Online. SPORTS