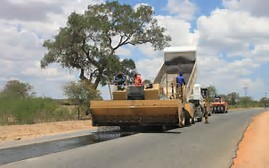 ​(File Pic): Road construction underway
BY NEWSANCHOR REPORTERS
Motorists who frequently use the Trelawney-Banket strip road have applauded Zvimba Rural District Council and the local leadership for prioritising rehabilitation of the stretch that had become a nightmare to navigate due to its poor state, prompting public transport operators to shun the route leading to transport problems.
Zvimba RDC led by its chief executive, Peter Hlohla, recently embarked on the road repair exercise following spirited lobbying by Ward 34 Councillor, Zandile Maseko.
The road maintenance also coincided with the onset of the 2018 tobacco marketing season, which saw most farmers facing transport challenges to ferry their produce to the auction floors situated mostly in Harare.
"As a councillor of the area, I realised that most transport operators were shunning the route citing the poor road network. This was affecting farmers and also the general commuting public to get vehicles to take them to Banket which is the nearest town.
"The road had become so bad, it would take someone about 30 to 40 minutes to get from Trelawney to Banket instead of 15 minutes on average. So, I asked the local authority to rehabilitate the road, a thing which is still work in progress, but at least 70 percent of the job has been done," Maseko said.
She implored local farmers to religiously pay their rates to Zvimba RDC so the authority could deliver on its mandate, which includes road servicing.
Motorists interviewed by this paper hailed Zvimba RDC and the local leadership for spearheading developmental programmes in the constituency.
Meanwhile, government has reportedly cancelled a contract with Geiger International, an Austrian company contracted to dualise the Beitbridge-Harare-Chirundu road, after it emerged the firm was delaying commencement of work over flimsy reasons.
The tender was estimated at $1 billion and the construction was expected to create thousands of jobs, while revolutionarise the driving experience on the busy road which has been characterised by horrific road traffic accidents due to its poor state.
LOCAL NEWS.