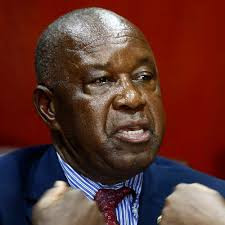 Chris Mutsvangwa
BY NEWSANCHOR REPORTER
The gloves are off in the ruling Zanu PF party after President Emmerson Mnangagwa issued a salvo purportedly targeting his top lieutenant Christopher Mutsvangwa, who this week was in the news for predicting his boss' defeat in the impending 2018 presidential.
Mutsvangwa, who was revving and ranting like a bull in a China shop, attacked all and sundry, including national political commissar Engelbert Rugeje for presiding over shambolic internal party polls that saw the veteran politician losing the right to represent Zanu PF in Norton constituency to unheralded Langton Mutendereki. He went on to say Mnangagwa risked losing the polls.
During the party's official manifesto and campaign launch held at the Harare International Conference Centre today, Mnangagwa fired warning shots to all senior Zanu PF politicians who feel entitled to positions for their role in the liberation struggle, and more recently, the infamous November soft coup that ended former president Robert Mugabe's 37-year rule.
Said the President in vernacular Shona, "Ukada kutora Zanu PF uchiisa muhomwe mako inokupisa, ugotsva, uchingotsva kusvika waibudisa muhomwe mako (If you want to take the party and shove it into your pocket, it will burn you until you cast it asunder)."
Mnangagwa, who is also the Zanu PF First Secretary, said the days of imposition of candidates and gamesmanship were over following a change of guard at the top.
"The days of imposition and chicanery are dead and buried. Never again to be resurrected no matter a person's standing. We do everything for the people. We must fully respect the rights of the people. The voice of the people is the voice of God. The task ahead of us after the primary elections is huge but we must unite. As we reflect, I encourage us to be guided by party constitution. It obliges us to abide by it. Each member must popularise the party because it is bigger than an individual."
He added, "You cannot force people to vote for you but persuade them.
"We as members of party must recognise the party's rich ideology. I call on all of us to be honest and honourable to ourselves and the public. Let us put differences aside and campaign for a thunderous victory for our party. A divided house cannot stand. Where there is unity God commands his blessings towards unity. No other party can put Zimbabwe in good hands.
"This manifesto is there to guide the next Government. The focus of our party is no longer politics alone, but politics and economics. Days of politics are over. We cannot stop other parties to go for politics but we need to put food on the tables of our people,"
The Zanu PF leader said the conduct of the just-ended party's primary elections elicited a flurry of complaints which the party's Politburo and national elections directorate would deal with.
"We will attend to every issue raised that is why we are not announcing names of candidates today. We will go through the challenges faced in the Politburo tomorrow (5 May). We need to guard against those with ulterior motives to undermine the party's democratic systems. New systems will be fine-tuned with time. We have an immense contribution to the national body politic. Zanu-PF has a special status and standing as a liberator. It's a courier of our national legacy and definer of our nation. Leaders must always come from the people," Mnangagwa said.
Controversial Mutsvangwa was fired by Mugabe as a government minister for his "contemptuous" conduct and his political career was hanging by the thread, only to have a new lease during the ouster of Mugabe that was preceded by street marches by ordinary citizens led by war veterans under his leadership.
Mutsvangwa is president of the Zimbabwe National Liberation War Veterans Association (ZNLWVA), an appendage of the Zanu PF establishment. TOP NEWS.