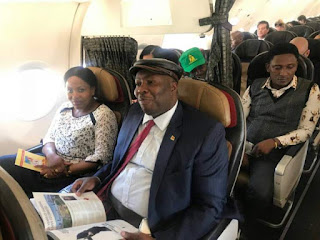 Returnee ex-minister and Zanu PF national political commissar and his wife on plane back home.

Fugitive former Zanu PF national political commissar, Saviour Kasukuwere, who returned home on Tuesday following his six-month self-imposed exile in South Africa, reportedly got material and humanitarian support from top African National Congress (ANC) officials as he fled persecution from the new administration led by President Emmerson Mnangagwa.
Kasukuwere, whose nickname is Tyson gained from his militant and bold leadership style, landed at the Robert Mugabe International Airport at midday Tuesday alongside his wife Barbra.
The fugitive politician, who was the kingpin of a faction opposed to Mnangagwa's ascendancy to the presidency known as G40, thanked a former South African minister for helping him during his exile.
Kasukuwere thanked the ANC chief and former Police minister, Fikile Mbalula and former Member of Parliament Tony Yengeni for the 'support and counsel.'
Posting on the microblogging site, Twitter for the first time in close to a month, Kasukuwere showed signs of a bitter-sweet experience about his time in exile and revealed the journey won't be easy.
"Life takes you to unexpected places, love brings you home," he said.
Yengeni responded to the tweet by congratulating Kasukuwere saying they felt blessed during his stay in the neighbouring country.
"Well done Tyson . . . Wishing you and family all the blessings. You blessed us with your short stay in our motherland South Africa . . .! Hope to visit you soonest," he replied to the tweet.
Yengeni went on to pass his greetings to former president Robert Mugabe.
"Please convey our warm and heartfelt warm greetings to the oldman."
It is at this point that the former minister of Local Government, Public Works and National Housing thanked Yengeni and Mbalula.
"Cde Tony thank you very much. Truly indebted to you and Mbalula for the support and counsel. It's not an easy journey and many hurdles lie ahead. I look forward to receiving you in Harare."
Kasukuwere skipped the borders when the military seized power and confined Mugabe to house arrest.
The former commissar, together with his colleagues Professor Jonathan Moyo and Patrick Zhuwao came underfire for being leading lights in the G40 faction that angled to succeed the aged Mugabe (94).
While his G40 colleagues have taken to Twitter and other social media sites castigating the new government as a 'military junta' and casting aspersions at the leaders, Kasukuwere remained silent and his whereabouts remained a mystery, only to resurface this Tuesday at the airport where he was met by pockets of protests by opponents calling for his arrest over unspecified charges.-Online/ Staff Reporter. TOP NEWS.