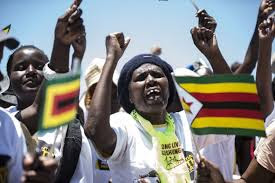 BY NEWSANCHOR REPORTER
Zanu-PF will roll out its election manifesto and campaign tomorrow, 4 May, with First Secretary and President Emmerson Mnangagwa expected to unveil the revolutionary party's roadmap ahead of harmonised elections this year.
The polls are expected by the end of July.
Zanu PF begins massive campaigns after the party held its primary elections this week to choose candidates for the National Assembly, Senatorial, council, women's quota and provincial council elections.
President Mnangagwa is the revolutionary party's Presidential candidate.
Tomorrow's launch will be held at the Harare International Conference Centre.
Zanu PF Administration secretary, Obert Mpofu confirmed the development.
"It's (the launch) on and there is no instruction other than that," he said.
"We have sent invitations to provinces."
Those invited to the event include Politburo, Central Committee, National Consultative Assembly members and all those who sit in the national executives of the Youth and Women's Leagues.
Also invited are national affiliate organisations (top 10), members of the Chiefs Council, district party coordinators and provincial party administrators.
Senatorial, National Assembly, proportional representative and council election candidates will be among the delegates and they will be introduced to the party leadership.
Mpofu last week said Zanu PF was taking the electioneering period seriously with the party having already started rolling out a billboard advertising campaign for President Mnangagwa.
Billboards have been erected in major cities with campaign messages, including branded vehicles being shown off on social media platforms.
"We are expecting all the provinces to converge in Harare where we will introduce our candidates," Mpofu said.
"The President and First Secretary of Zanu PF is going to give us a roadmap on how we are going to conduct our elections. It's going to be a big day and there will be a big message from His Excellency, supported by the leadership of the party. What we have done at the moment is to mount billboards and other advertising material.
"This is electioneering time. This is just an appetiser of what we are going to be doing. We want to show those that thought we were not serious about elections that we are the most serious party in the race."
Recently, the party's national political commissar, Lieutenant-General Engelbert Rugeje (Retired), said once the party rolls out its campaign material, it would distribute more than 15 million T-shirts, 15 million caps and 2 million wrappers. LOCAL NEWS.