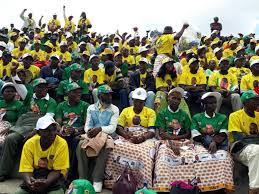 TWO of the 49 people injured in a suspected grenade explosion during President Emmerson Mnangagwa's campaign rally at White City Stadium in Bulawayo on Saturday, died at Mpilo Hospital yesterday.
Health minister David Parirenyatwa and Bulawayo Metropolitan Affairs minister Angeline Masuku confirmed the development, but declined to name the deceased, saying their next of kin had not yet been informed.
"We have lost two victims of the blast that occurred on Saturday in Bulawayo. Our medical teams have been working hard to assist, but they were seriously injured. One of them who passed on had his intestines out and he lost a lot of blood," Parirenyatwa said.
National police spokesperson Senior Assistant Commissioner Charity Charamba could not be reached for comment as her mobile phone went unanswered, but sources claimed that the deceased were members of the Presidential Guard.
Although Mnangagwa left unscathed in the blast, several of his top lieutenants, among them Vice-President Kembo Mohadi, Vice-President Constantino Chiwenga's wife Marry, Zanu PF chairperson Oppah Muchinguri and party commissar Engelbert Rugeje were injured.
The stadium has been sealed off since Saturday as police and military ballistic experts were combing the area for possible leads to the cause of the blast, although no arrests have been made to date.
In a related development, the Amalgamated Rural Teachers' Union of Zimbabwe (ARTUZ), which is seeking a High Court interdict to stop Zanu PF from frog-marching teachers and pupils to its rallies, yesterday told the court that their case was bolstered by the Bulawayo incident.
Through their lawyer, Doug Coltart, ARTUZ claimed schoolchildren could have been exposed in the attack had the rally been held during school days.
Masvingo High Court judge Justice Joseph Mafusire, who is presiding over the matter yesterday postponed the hearings to Thursday after Zanu PF failed to pitch up, while Talent Udenge from the Attorney-General's Office representing Primary and Secondary Education minister Paul Mavima said he needed time to file his heads of arguments.
Coltart had argued that the matter should proceed even without the input from Zanu PF because of the recent bombing in Bulawayo "which puts schools kids under irreparable harm".
Since 2014, Mnangagwa has been a target of sustained foiled assassination attempts which include, cyanide lacing in his office, several break-ins in his government office and poisoning among other alleged attempts.
As Vice-President between 2014 to last year, Mnangagwa's office was reportedly broken into a record six times, but police were yet to make arrests − leaving many questioning the capability of the State security apparatuses to bring the matter to finality if it was not an inside job.-Online. TOP NEWS.