400 workers get respite as farmer returns 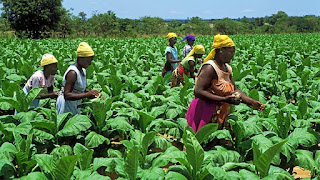 BY NEWSANCHOR REPORTER
Over 400 farm labourers who had lost their jobs following the eviction of a white commercial farmer, got relief after government overturned the decision to give the land to new small-scale indigenous farmers.
The development allows the unidentified original owner to return to the property immediately.
Zvimba district administrator, Andrew Tizora, said the new administration led by President Emmerson Mnangagwa had swiftly moved to resolve the "erroneous allocation" of land to new indigenous farmers at Fairhill farm in Banket, Mashonaland West province.
He said the Lands ministry had withdrawn offer letters to a group of A1 farmers who had quickly moved-in and sub-divided the vast maize and wheat farm.
The new tenants disrupted operations at the farm, prompting the unnamed original owner to flee from his property. This rendered over 400 farm workers jobless.
"The challenges at Fairhill farm have been resolved. Government has ordered the owner who had left the country to come back and continue operations. We guarantee his safety," said Tizora.
The 'invaders' had descended on the farm armed with offer letters from the Lands ministry, but the district administrator said the letters had 'erroneously' indicated that they settle at Fairhill farm when, infact, the available land was at Fairhill extension.
Tizora was speaking during a re-engagement meeting with white commercial farmers at Trelawney Training Centre, Zvimba South, recently.

Tizora said the white commercial farmers should embrace the new dispensation and join "the bandwagon of progress."
He also hailed them for contributing to the development and rehabilitation of infrastructure such as roads in the area.
Jan Strydom of Nzira farm said farmers were committed to the development of the country. He urged his colleagues to vote Zanu PF in the upcoming elections as the new government had shown zeal to improve the economy and livelihoods of the general citizenry amid peace and stability.
Robert Miller of Cloverly farm echoed Strydom's sentiments saying farmers were willing to partner government to ensure the success of the command agriculture programme.
Zanu PF Zvimba South constituency parliamentary candidate, Phillip Chiyangwa, while addressing the same gathering, reiterated farmers' investments in the country were protected and urged them to work for the betterment of all Zimbabweans regardless of colour, creed or tribe.
The businessman-cum-politician pledged to help farmers, who have not yet received their 99-year leases, to acquire them. LOCAL NEWS.