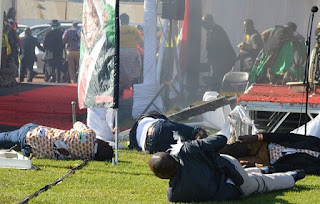 BY NEWSANCHOR REPORTERS
A massive explosion has rocked a busy shopping centre, heightening fears among Chinhoyi residents who suspect a bomber was out to kill unsuspecting revellers and shoppers in the farming town.
A suspected bomb was detonated at Gadzema Shopping Centre, near the popular Varsity Blues Night Club and Wainera Bottle Store, at around 9pm Sunday night by an unidentified person.
So far, indications are that noone was injured in the incident.
The blast left several shop windows shattered while revellers at the two popular drinking joints reportedly scurried for cover.
When our news crew visited the scene Monday morning, police had cordoned off the area awaiting forensic experts to comb the place for possible leads to unpack the mysterious blast.
Tichaona Mtetwa, an eyewitness and proprietor of one of the affected shops, said he heard a loud blast coming from the centre of the road that separates the two blocks of shops.
"I was shocked to hear such loud noise which emanated from the middle of the road and windows shattering from the impact. Within seconds, my shop was engulfed in a cloud of smoke while revellers ran to safety in all directions.
"When I went outside to find out what had happened, I saw people scurrying in different directions but failed to establish what had exploded. We are clueless," said Mtetwa.
Another eyewitness, Sheperd Chitehwe said he heard an explosion near a parked vehicle after an object was thrown by an unknown assailant who immediately fled the scene following the blast.
Chitehwe said he was not sure if the car was the target of the explosive.
Mashonaland West provincial spokesperson, Inspector Clemence Mabgweazara could not shed more light on the suspected bomb blast, saying investigations into the matter were still underway.
The Chinhoyi blast follows hard on the heels of another explosion that shook White City Stadium in Bulawayo soon after President Emmerson Mnangagwa addressed a rally. The Zanu PF administration has blamed the Bulawayo blast on 'spoliers' who want to paint a picture of a destabilised country not ready to hold free, fair and credible elections slated for July 30.
Mnangagwa said members of the G40 faction loyal to ex-president Robert Mugabe and his wife Grace were responsible for the explosion that left two security aides dead and scores of others injured and hospitalised. TOP NEWS.