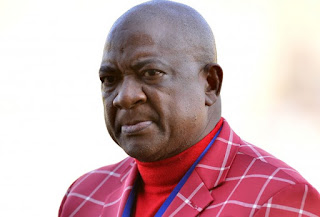 BY NEWSANCHOR REPORTERS
Aspiring Zanu PF parliamentary candidate for Zvimba South, Philip Chiyangwa, this week embarked on a door-to-door campaign to woo prospective voters in Banket.
The affluent businessman-cum-politician, who won the right to represent the revolutionary party amid controversial primary polls marred by alleged vote buying and rigging, implored Banket residents to rally behind his candidature and that of President Emmerson Mnangagwa to ensure development comes to the constituency.
Chiyangwa called upon the electorate to vote for Mnangagwa inorder to give him the mandate to fulfil the gains of the military action 'Operation Restore Legacy' that saw the resignation of former president Robert Mugabe, whom he accused of surrounding himself with counter-productive individuals.
The flamboyant politician said the opposition must be trounced and buried once and for all by overwhelmingly voting ZANU PF in the forthcoming elections.
Chiyangwa, a known introvert, came off his high horse to mix and mingle with ordinary people around Kuwadzana township's Wards 22 and 23, where he also interacted with vendors.
Said Chiyangwa, "When we vote on 30 July we are not just seeking victory for Zanu PF but restoring legitimate power and authority to economically empower our people. This had been usurped by a clique around former president Mugabe that was out to self-enrich. Now let's go and give our President ED total power to lead us to empowerment in all areas. Let us give President Mnangagwa ammunition to complete the November Operation Restore Legacy to empower people from the grassroots.
"Our country used to be the best economy in SADC but selfish people were slowly destroying it. Our president is now busy rectifying it and he needs your vote to totally unlock investment potential from around the world so that we can fully revive our economy again."
The aspiring Parly returnee, who once served as Chinhoyi MP, was accompanied by his wife and two local authority candidates, Never Hutepasi and Richard Muganhiri.
Chiyangwa pledged to sink six boreholes in Banket town which is perennially experiencing water shortages. He also promised to create a revolving fund for vendors to access affordable loans and said vendors should not be chased away from their stalls, but council should allocate them designated vending areas before such action.
As a show of his commitment to improving the livelihoods of the Banket electorate, the maverick tycoon paid a $400 water bill for second-hand clothes vendors, who had their water supply cut off by the Zimbabwe National Water Authority (Zinwa) over non-payment of dues.
Chiyangwa, who hails from the Zvimba area, took pot-shots at former Mines minister and incumbent Zvimba South MP, Walter Chidhakwa, who was expelled from the party for contesting for the legislative seat as an independent.
"Don't waste your time with rebels like Chidhakwa. I was once expelled from Zanu PF, but I continued to be faithful to the party until I was readmitted. Why is he refusing to be disciplined? Therefore, don't have anything to do with him."
Chidhakwa was barred from contesting in the Zanu PF primaries following accusations he was a G40 cabalist, a grouping of politicians loyal to deposed former president Robert Mugabe and his wife Grace, resulting in him registering to contest as an independent candidate. Chidhakwa is Mugabe's close relative.
Chiyangwa, who is also an international football administrator, faces six other aspirants, who include Chidhakwa, Ishmail Walker Gombingo (ZIPP), Christopher Jamu (Independent), Innocent Takawira Makuyana (NPF), Alloys Nyamadzawo (MDC Alliance) and Nelson Shayamano (PRC). LOCAL NEWS.