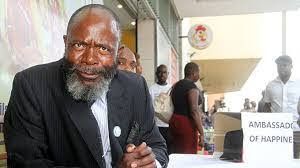 BY NEWSANCHOR REPORTER
Outgoing Member of Parliament for Buhera South, Joseph Chinotimba has lashed out at some 'greedy and unscrupulous' traditional leaders, who are abandoning the traditional roles, instead dabbling in partisan politics that is hurting development initiatives.
The outspoken legislator, who is the Zanu PF candidate for Buhera South in the upcoming elections on 30 July, singled out Chief Chamutsa of Buhera for attack, describing him as a "full-time politician."
Under the country's Constitution, Chiefs and other traditional leaders such as headmen are not allowed to engage in nationalistic politics. However, the traditional leaders have been accused by the opposition parties of playing political commissars for the ruling Zanu PF in rural areas.
Chinotimba hit out at the chief Tuesday during the commissioning of Nyadi Bridge in Buhera South officiated by Manicaland Provincial Affairs minister, Monica Mutsvangwa.
"There is one of our chiefs who is troubling us here in Buhera," he said.
"This chief has turned himself in to a full-time politician. His name is Chief Chamutsa. I have tried several times to engage him, but to avail. He is the only chief from Buhera who has been giving us problems."
Chinotimba said there were some 'greedy' and 'unscrupulous' village heads who were dabbling in politics, and alleged they were receiving incentives from powerful politicians for them to influence their subjects to endorse certain political positions and decisions.
Government should withdraw incentives to all traditional leaders fingered in political squabbles, the affable and popular lawmaker said.
"We know there are some village heads who have since joined politics. They should stop executing their traditional roles.
"I think those who are being involved in politics should stop receiving their incentives from the government. This is because they are getting something from politics and they should not also receive what others who are not actively participating in politics get."
Meanwhile, Chief Fortune Charumbira of Masvingo province was this week re-elected president of the Zimbabwe Chiefs Council while and his deputy Chief Mtshane (Matebeleland North) was also retained uncontested.
The two automatically become Senators. The election was conducted by Zimbabwe Electoral Commission officials at Mkwati Building in Harare ahead of the 30 July harmonised elections. TOP NEWS.