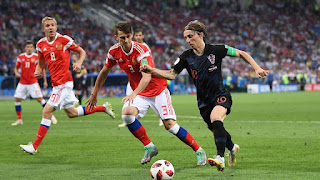 BY NGONI MUWONWA
The FIFA World Cup 2018 edition comes to a close this Sunday. Football pundits, and fans alike, have been taken on a football bonanza that hasn't been short of disappointments, upsets, surprises and drama.
In this article, l will take time to reflect on what has transpired and why football lovers are considering the 2018 soccer exposition as the best edition ever.
Disappointments
The major disappointments have been African teams. Outside Senegal, no single team from the continent seemed to have come to the party.
The likes of Tunisia, Egypt and Morocco or even Nigeria did not exhibit any flair or tenacity that is required at this world stage. Our continental representatives lacked the desire to win and failed to justify their presence. If we were to rank the World Cup in terms of continents, Asian and Caribbean nations were a mile ahead of African teams. This is despite Africa boasting to be a football mad continent!
African teams once again failed to progress beyond the group stages, bringing to the fore questions of their lack of talent and depth, both on and off the field of play. Some have argued that the World Cups always expose the lack of talent among African players, let alone technical astuteness on the part of coaches required to compete at this level. Of course, we need to celebrate Senegal and their manager, who represented the continent well, only to be eliminated by a technicality, increasing the pain to African fans who had hoped for a repeat of the France '98 Senegalese feat.
Upsets
Well, the World Cup provided enough upsets as well. All the pre-tournament favourites were sent packing in the early stages of the showcase.
Germany, Spain, Portugal and Brazil were sent home in that order. It wasn't much of an upset for Brazil who faced a strong and resurgent Belgium side, which was improving with each game. With rising stars like Lukaku and De Brugue, Belgium progressed throughout the tournament with consistency and form. They played and outclassed their opponents on the back of coordinated team play. Unlike the pre-tournament favourites who boast of big names, Belgium always produced team effort, which trumps individual talent.
Of course, the biggest upset were Germany, going into the history books twice: for failing to defend their title and failing to progress beyond the group stages as defending champions. Don't take that for granted, as they are not easy feats to escape from! Not much can be said of Portugal and Spain, they always carry the pre-tournament favourite tag, but they never rise to the occasion, to prove why!
Surprises
We have already talked about Belgium. A huge surprise and playing a brand of football that we last saw in the early '90. Fluid team play.
Of course, the biggest surprise have been the hosts. Russia surprised everyone including themselves. They built their confidence with each game only to be ousted through a penalty shoot out. How cruel! Buoyed by home advantage, the Russians played good football and made sure the tournament lit the hearts of the locals, who on a normal day are apathetic to football issues. That is what World Cup hosts should do, unlike when South Africa were eliminated in 2010 in the group stages.
England have also surprised many for progressing beyond to the quarter finals for the first time in 28 years. England have always been a huge disappointment at the World Cup, especially because most people equate the class exhibited in the English Premier League with the English national team. We forget that most players who entertain us during the Premier League are not locals! Nonetheless, England played very well at this World Cup, confidently scoring, even breaking their spot kick jinx. They have surely achieved more than the David Beckham generation.
Drama
The Video Assistant Referee (VAR) must go down as the major addition to the World Cup that increased the drama. We are surely in the digital age. The VAR played a pivotal role at the World Cup, increasing the number of penalties from 18 to 28 in the group stages as compared to other editions. The introduction of the technology has resulted in players being penalised for shirt-pulling and grappling inside the box, offenses which used to go unnoticed. Undeniably, VAR increased drama, suspense and intrigue.
This being the second time the technology has been used at the World Cup, the 2018 edition became the first time the technology became overtly decisive in turning games and even groups on their heads. What drama! And that is why some are calling it the best World Cup tourney ever, even before we witness the finals pitting which-ever teams that emerge victorious in the semi-finals!
May the best team win this best ever World Cup! SPORTS.