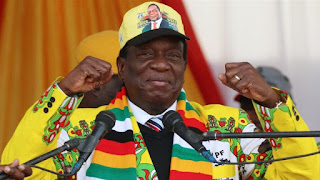 BY NEWSANCHOR REPORTER
It's game on!  The MDC Alliance late Friday afternoon, just under 30 minutes before the official close of business at the Constitutional Court (ConCourt) in Harare at 4pm, lodged its papers challenging the results of the presidential election which the electoral management body, ZEC, declared was won by President-elect Emmerson Mnangagwa.
Lawyers representing the alliance's candidate, Nelson Chamisa successfully filed their papers and paid the required $5 000 fee challenging the 'victory' by Mnangagwa, who came to power last November on the back of a soft military coup that ended Robert Mugabe's 37-year iron-fisted rule on Zimbabwe.
President-elect Mnangagwa's inauguration, initially tentatively set for this Sunday had no political party challenged the election result by today (10 Aug), has been scuttled following the latest development.
Government had since started inviting dignitaries who include diplomats accredited to Zimbabwe for the inauguration of the President-elect.
The alliance has assembled a team of competent legal minds who include foreign-based advocates and locals in an attempt to reverse the poll outcome. It claims it has compiled an "irrefutable dossier" to buttress it claims of rigging and electoral fraud.
The ConCourt has up to 14 day to make its determination, to either nullify the result or endorse it.
Despite the contention in alleged rigging of the vote, the post-electoral period has dented Mnangagwa's, otherwise, seemingly easy walk to State House.
While the pre-election and voting itself was largely peaceful, protests in the aftermath of the watershed plebiscite, which were met with heavy-handedness by the army, left three people dead, according to police figures, although the number of fatalities is reportedly higher at six.
What triggered the violent demonstrations in Harare are the suspiciously high numbers announced by ZEC for House of Assembly results in favour of Zanu PF which bagged 145 seats.
In some cases, the figures were more than registered voters in those constituencies taking into account that the voter turnout was estimated at 75%.
Woes continued to mount this week for Mnangagwa and his administration after the United States government led by President Donald Trump renewed sanctions against Zimbabwe, thereby making it ineligible for international financing from key global funders. TOP NEWS.