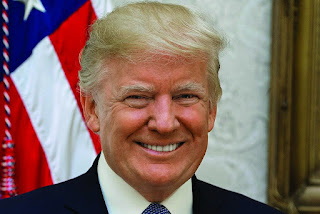 The United States of America President Donald Trump yesterday signed the Zimbabwe Democracy and Economic Recovery Amendment Act of 2018 (S 2779) into law, effectively tightening the noose on President-elect Emmerson Mnangagwa's government and dampening hopes of re-engagement with the international community to jumpstart the country's comatose economy.
The new law, which amends the Zimbabwe Democracy and Economic Recovery Act of 2001, effectively extends US sanctions against Zimbabwe.
Its signing follows the passing of Zidera by the US Senate and Congress last month ahead of Zimbabwe's July 30 polls.
The announcement was made by the White House in a statement yesterday which flies into Mnangagwa's hopes of re-engagement to end the country's international pariah status.
"On Wednesday, August 8, 2018, the President signed into law: S 2779, the 'Zimbabwe Democracy and Economic Recovery Amendment Act of 2018,' which amends the Zimbabwe Democracy and Economic Recovery Act of 2001," the statement read.
Zimbabwe has been under US sanctions since 2001 when the world economic giant imposed measures to punish former President Robert Mugabe's government for gross human rights abuses and following the chaotic land reform programme.
Mnangagwa, who took over from Mugabe on the back of a military operation last November, had been desperate for international acceptance to lure investors and revive the economy.
The US had indicated it would evaluate its foreign policy on Zimbabwe after the holding of free, fair and credible elections.
The polls have been contested with the main opposition MDC Alliance leader Nelson Chamisa claiming massive electoral fraud, rigging and intimidation of voters.
Chamisa, through his lawyers, this Friday was expected to file his petition at the Constitutional Court in a bid to annul the announcement that Mnangagwa won. The 40-year-old opposition leader claims he won but ZEC, in collusion with Zanu PF, manipulated the figures to give Mnangagwa a slim victory of 50, 8% against his 44, 3%.
Chamisa argues he has enough evidence to overturn the presidential poll result and stop Mnangagwa's inauguration to State House, which was initially scheduled for this Sunday.
Meanwhile, the MDC Alliance has announced plans to challenge results in 21 constituencies, where it claims there was massive rigging, as it seeks to overturn Zanu PF's two-thirds parliamentary majority.
MDC-T secretary-general Douglas Mwonzora confirmed the development, saying they would file the petitions after the Heroes' holiday.
Meanwhile, MDC Alliance principal Tendai Biti, who was this week deported from Zambia following his attempt to get asylum in that country, appeared in court Thursday and granted $5 000 bail, coupled with stringent conditions.
Biti had attempted to flee Zimbabwe alleging his life was in danger from the State which was hunting him down for various offences, among them inciting violence and illegally announcing presidential election results.
His deportation by Zambian authorities, ostensibly under instruction from President Edgar Lungu, has received international condemnation as the northern neighbour is accused of flouting international law relating to political refugees.-Online/ NEWSANCHOR REPORTER. TOP NEWS.