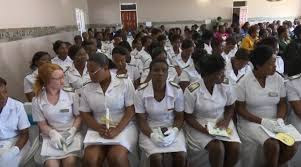 'Health Service Board is not a firing squad'

BY JAMES MUONWA
The Health Service Board (HSB) has embarked on a rebranding exercise
in a bid to strengthen its role of improving conditions of service in
the health sector and shrug-off its reputation as a "firing squad."
This comes as the statutory body gears to pioneer a new pay structure,
from the current that is constituted by 70% non-pensionable allowances
of net salaries.
HSB executive director, Ruth Kaseke told health workers during a visit
at Chinhoyi Provincial Hospital on Thursday, that her organisation had
earned an unenviable reputation as a "faceless" body whose sole
mandate was to fire nurses, doctors and other ancillary health
personnel for various unethical and unprofessional practices.
She urged health sector workers to remain steadfast and professional
as HSB negotiates with Treasury for better pay and improved working
conditions.
"The HSB is not merely there to fire workers as people have come to
believe that we are a firing squad. We are there to set and negotiate
conditions of service for health sector employees.
"As we do this, please remain professional and safeguard the sector we
so dearly cherish," said Kaseke, who was accompanied by HSB trustees.
The HSB institutional visits, which also took the entourage to Kariba,
coincided with a 50% cost of living allowance awarded to civil
servants.
During the interface at Chinhoyi Hospital, sister-in-charge Meggis
Chisango decried the shortage of essential medical equipment and
drugs, work overload due to a depleted staff establishment which is
not in sync with mutating disease patterns, demotivating promotion and
grading system and poor remuneration.
Health workers also demanded free services at public hospitals and
clinics, among other demands.
HSB spokesperson, Tryphine Rachel Dzvukutu said the objectives of the
tour were to meet health workers at various institutions to have an
appreciation of local work environments and infrastructure, to provide
direct support to hospital management boards, assess challenges faced
by hospitals and share HSB expectations.
"In the process, we hope to enhance the image and visibility of HSB,"
said Dzvukutu.-TOP NEWS.