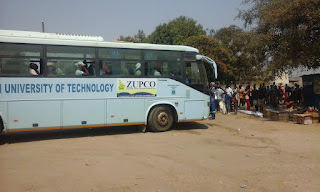 The recent opaque deal in which Chinhoyi University of Technology ceded
three 75-seater buses to public transport utility Zupco has elicited hyped
talk among stakeholders, including students and staffers, who feel
hard-done by the development that has resulted in them failing to access
the buses due to overwhelming de
mand for the service. Zupco is charging 50cents to areas such as
Chikonohono, White City and lately Alaska, situated 15km from Chinhoyi, a
trip which private players were charging $5.
(Picture by James Muonwa)
TOP NEWS