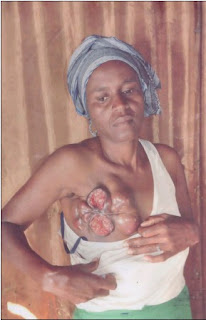 BY JAMES MUONWA
Wherever she went noone believed that beneath the neat dressing lay a septic wound on her breast, incessantly oozing out pungent puss and at times blood.
Outwardly, this tormented soul looked healthy and could easily pass any health check.
As she went around knocking on doors pleading for donations from well-wishers, many scoffed at her labelling her a con-artist out to make a quick buck riding on people's sympathy.
"My body was reduced to an object for display. l was ridiculed and stripped of my womanhood and all dignity was lost as l begged for alms to undergo chemotherapy."
This is the story of 49-year-old Mwaoneni Mupungi who hails from Birchenough Bridge, Manicaland province, a survivor of breast cancer who still lives today to tell her tale.
Mupungi, a mother of three, narrates that her neighbours derisively bestowed on her the moniker "Madam Boss" as she would wake up very early in the morning daily to bath and launder her soiled blankets.
Unbeknown to the neighbours was that this was no display of cleanliness, but a way to vapourise the odour that accompanied the puss and blood from the cancerous breast.
Mupungi, who is widowed and unemployed, says what started off as a small lump on her breast in 2009 was diagnosed as cancer in 2014.

Following the diagnosis, she Mupungi says she fell into depression and was scared to die and leave her three children orphaned.

She literally saw death starring at her.

As all hope was fading and her toil taken her to every potential funder for her to undergo specialist treatment, Mupungi says she finally knocked at Island Hospice's offices in Harare where she got information on palliative care.

Speaking during World Hospice and Palliative Care Day recently, Mupungi emphasised the need for specialised care for patients and called on the government to heavily subsidise cancer drugs which are very expensive.

Cancer has overtaken HIV and Aids and other killer ailments to become the deadliest disease in Zimbabwe, where 30 percent of deaths are recorded annually.

Over 250 000 children and adolescents below 20-years old are diagnosed with cancer every year, while 90 000 do not survive.

Health and Child Care minister, Obadiah Moyo, in a speech read on his behalf by the director for non-communicable diseases in the Health ministry, Dr Justin Mudavanhu during belated World Hospice and Palliative Care commemorations hosted recently at Chinhoyi Provincial Hospital, raised concern over the urgent need to scale up integration of palliative care in the health sector inorder to enhance equitable access to holistic quality care for people suffering from life-threatening illnesses.
"Cancer accounts for 30 percent of mortality in Zimbabwe and up to 7 000 new cases are recorded annually.
"The commemoration is coming at a time when Zimbabwe's epidemiological profile reflects a dual burden of communicable and non-communicable
diseases (NCDs) that have led to high morbidity and mortality and an observed increase in the number of NCDs such as hypertension and cancer," said Moyo.
The Health minister said 95 percent of adults and children with NCDs and patients afflicted by HIV/ Aids and TB require palliative care but a paltry 5 percent was receiving it.
"With the growing demand for palliative care in the country, the development of improved capacity to delivery of palliative care is a high priority."
Moyo said the capacity building will be through knowledge, skills and tools that enhance the early identification of patients who require the service, screening and referral of patients to the next level of care.
Hospice and palliative care day is marked globally during the second Saturday of October to raise local, regional and international awareness on the subject.
This year's commemorations were held under the theme, 'Palliative Care: My Care, My Right'.-LOCAL NEWS.