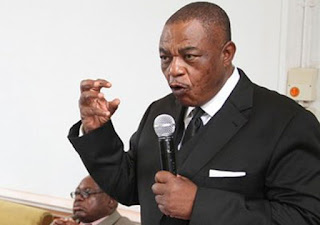 BY ELVIS DUMBA
Vice President, Retired General Constantino Chiwenga does not harbour any ambition to be the president of the country as he is content with the quality leadership of President Emmerson Mnangagwa, a Cabinet minister has said.
Minister of Justice, Legal  and Parliamentary Affairs, Ziyambi Ziyambi, who is also the Mashonaland West Zanu PF chairperson, was speaking to party supporters attending the party's provincial inter-district conference held at Chinhoyi University of Technology last weekend.
"Let's unite the party and stop fuelling factionalism and as from today let's stop labelling each other with names such as G40 or Gamatox. We are all Zanu PF and let us embrace even those who have gone out from us as we need more people to join the party and work for the good our country," he said
Ziyambi castigated those whom he said are sowing divisions in the party by spreading lies.
"We need to deal with those fuelling discord by spreading lies,there has been reports attributed to war veterans and some sections of this province with aims that some want to endorse Vice President Chiwenga for presidency and I know the vice presidency has never ever sent anyone to endorse him. He himself does not harbour any ambitions to be the president as he was the first to endorse President ED for the presidency in 2023.
"Those who are trying to cause confusion and discord should be dealt with," said Ziyambi.
He said wings of the party, including war veterans, are happy with the leadership of Mnangagwa as the president and said those who lost previous party position should work and support those chosen whilst preparing for positions when the time comes.
Mashonaland West province endorsed Mnangagwa as the party's presidential candidate for 2023 elections with reports that the province is largely divided over the endorsement of Mnangagwa with some members being reported against the endorsement.
Ziyambi quashed attempts by Zvimba district to have its inter-district meeting before the provincial meeting as the district reportedly wanted to endorse VP Chiwenga among its resolutions for the conference.
Senior party member's who requested not to be identified said the party is headed for a major split as factionalism is rife in the province with money changing hands as people jostle for positions in the province with some aligning themselves to VP Chiwenga and some to Mnangagwa
"All is not well even if you look at the attendance at this conference only eight member of Parliament has turned up out of more than twenty which show that people are tired of being used by power hungry politicians who are focussing on trivia leadership wrangles instead on bread and butter issues" he said.-TOP NEWS.