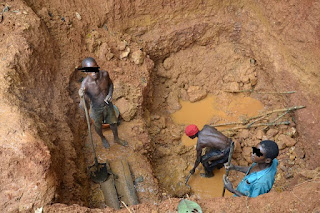 By James Muonwa
Artisanal gold mining areas in Mhondoro-Ngezi, Sanyati, Chegutu and parts of Makonde district are notorious hot-spots in the spread of HIV/ Aids, as both males and females flock to make a living out of gold panning and prostitution.
This was recently revealed by National Aids Council acting Mashonaland West provincial manager, Davison Mambudzi, who said the prevalence rates in illegal mining settlements remained high.
"Dotted artisanal mining activities in Mhondoro-Ngezi, Sanyati, Chegutu and Makonde are contributing to the relatively high rates of infections, in our standards.
"This is due to young people, both men and women from all walks of life, that are being clustered there in search of better livelihoods," said Mambudzi.
He noted that HIV/ Aids prevalence rates in the province were relatively low, across all age groups, as compared to other provinces with Kariba district the lowest at 5, 9%, Hurungwe 6, 9%, Mhondoro-Ngezi 7, 7%, Zvimba 8, 1%,  Chegutu 8, 3%, Makonde 7, 7% and Sanyati at 6, 9%.
Mambudzi attributed the low prevalence in Kariba district to entrenched cultural values that abhor multiple-concurrent sexual partners and prostitution.
"Kariba, with all it's fish business that attracts many people, has the lowest HIV/Aids prevalence rate because of cultural roots that speak to issues of conformity to tradition. The natives don't practice multiple sex partners or be intimate with outsiders, therefore, prostitution is taboo" he said.
The NAC acting provincial head said the Covid-19 pandemic had not spared their HIV/Aids mitigation programming, although efforts are being made to scale-up door-to-door visits, use of radio and social media messaging.
Four programme models being pursued include; the brother-to-brother, sister-to-sister, peer-led and the dreams initiative.
Mambudzi highlighted that during physical visits, NAC personnel keep strict adherence to set World Health Organisation (WHO) guidelines to avoid the spread of Covid-19, such as wearing personal protective ware, social distancing and sanitising.-LOCAL NEWS.