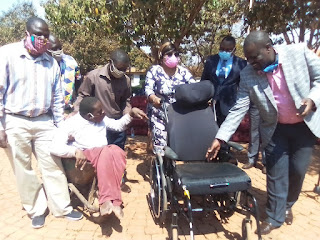 By James Muonwa recently in Mt Hampden
A physically-challenged Mt Hampden man, who has spend most of his adult life being pushed in a wheelbarrow, had his plight ended following a wheelchair donation by the local legislator.
Patrick Mhinga (36) of Alpha compound on the outskirts of Harare, was all smiles Monday when he received a special wheelchair from Zvimba East Member of Parliament, Tawanda Tungamirai.
Mhinga came to receive the donation being carted in a ramshakled wheelbarrow.
The wheelchair donation came following a needs assessment exercise done by the MP, who has embarked on a vigorous campaign to assist needy people in various communities under his jurisdiction.
"The responsibility to assist vulnerable citizens should not rest on government alone, as community members we should help each other out," said Tungamirai.
Tungamirai, son to late liberation war icon and national hero Josiah Tungamirai, says Mhinga's condition and welfare had touched his heart, hence he had to act so as to make his movement from place to place less strenous.
The donation, held at Alpha Primary School, was witnessed by Social Welfare minister Paul Mavima and Mashonaland West Minister of State, Mary Mliswa-Chikoka.-LOCAL NEWS