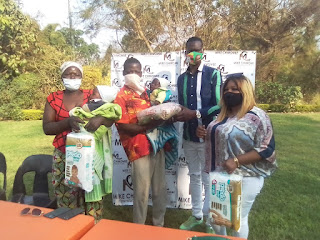 By James Muonwa
For an unemployed father of three minor children to phantom the spectre of his pregnant wife bearing him three more children, resulting in three more mouths to feed in the midst of poverty, is nightmarish.
The thought then becomes a dark reality when a scan done of his expecting wife, indeed, confirms she was carrying three foetuses in her womb.
Fast forward to 22 December 2019, Evalisto Maravire's wife Rosewita King (37) gave birth to three bundles of joy, but both hubby and wifey felt ambivalent, whether to celebrate or rue over the 'curse' that God had thrust upon their already miserable lives.
For the 49-year-old now father of six children, the triplets were not a curse as he had originally pondered, but were God's design hence he christened the them, Anenyasha (girl), Anesu (boy) and Anotida (girl).
The ravenous trio, said the mother, was taking a toll on her health as she fed them on one breast after her other breast developed a lump which she thought was cancerous, and stopped milk production.
The onerous task to feed the enlarged family, which now includes triplets now aged 8 months old, became unbearable for the couple and needed the intervention of charitable members of the Cheuchi community in Makonde district, Mashonaland West province.
The couple has three other children aged 11, seven and four.
"Life had thrown us lemons and we were in a fix. We couldn't feed our children as well as extended family as we live at my in-laws homestead in Cheuchi," narrated Maravire, who originally hails from Gokwe-Kana, Midlands province.
King told NewsAnchor that she had sleepless nights as the children competed and wailed for the little milk she was producing from one breast.
"I never sleep at night with the children crying. This is why we sent out a Save Our Souls (SOS) call as there was urgent need for baby milk formula," said King.
Indeed, the SOS call was sent out and the Mike Chimombe Foundation Trust (MCFT) sprang to assist the needy triplets.
On Friday, MCFT handed over a donation of baby milk formula, other foodstuffs and clothing items estimated at US$2 000 at a ceremony held at the plush Inyasha Gardens in Chinhoyi.
The trust's founder and principal, Mike Chimombe, pledged to continue assisting the triplets with food and other humanitarian needs.
The philanthropist, politician and businessman all rolled into one, also committed to pay the triplets' tuition fees from early childhood development (ECD) up to tertiary level.
"The trust heard the plea for help for the triplets and we saw it befitting that we donate these items to them. We also wish to announce that MCFT will take care of these children's education needs for the next 20 years. These needs include, but not limited to, tuition fees, uniforms and so forth," said Michelle Rusare-Chimombe.
The school fees pledge will be hedged through an insurance scheme, ZB Life More Cover Endowment Plan.- LOCAL NEWS