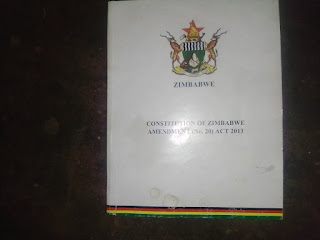 By John Mrwira
The Ministry of Justice, Legal and Parliamentary Affairs has partnered a non-governmental organisation, Community Alliance for Human Settlements in Zimbabwe (CAHSZ), to raise public awareness on the provisions of the country's Constitution in marginalised communities.
The new Constitution was adopted in 2013 and some laws are still to be aligned to it.
Addressing a public awareness meeting on the Constitution in Alaska, a former mining settlement on the outskirts of Chinhoyi, acting director (Constitutional and Parliamentary Affairs) in the Ministry of Justice, Legal and Parliamentary Affairs, Charles Manhiri said it was government's thrust, as provided for in the Constitution of Zimbabwe, to ensure citizens were aware of the supreme law.
"Knowledge of the Constitution will empower citizens to actively participate in matters affecting them, such as development," he said.
Manhiri reiterated the ministry had also embarked on various initiatives to popularise the supreme law among the general citizenry. He said people also needed to understand what the law provides and how it affects their livelihoods.
"Some of the landmark achievements we did as a ministry was to come up with the Constitution in all our indigenous languages to make sure all different speaking citizens can understand the Constitution."
The Constitution is also available in braille, he added.
Netsai Zvakasikwa, chief law officer with the ministry, urged local leadership to help in unpacking provisions of the national law.
Zvakasikwa underscored that compliance with the constitutional requirements by citizens results in economic development of the country.
"Land is critical in our Constitution as most of the activities or resources we use come from land. So abiding by the dictates of the Constitution pertaining land will translate to development," she said.
Francis Mukora, advocacy and  communications coordinator for CAHSZ, said the partnership with the ministry meant to promote constitutional awareness to marginalised communities was critical.
"Thus as CAHSZ we hope that through this partnership with government we will be able to nurture a culture of active citizen participation and engagement."
Centre for Youth Development Trust (CYEDT) coordinator, Clifford Musangeya welcomed the decentralisation of Constitution awareness to marginalised communities.
"The move taken by the ministry with their partner is commendable as marginalised communities usually lag behind in matters that affect them also as citizens of Zimbabwe, " he said.
"From this meeting we have been empowered as youths, we are going to share the knowledge with others so that we realise our constitutional rights and all other information that affect us as citizens of this country," said Trynos Mlambo, a participant.-LOCAL NEWS