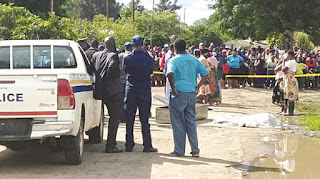 A Grade Seven pupil at Sandara Primary School, who was returning home
from sitting for an examination, was Tuesday stoned to death by a
mentally-challenged man.
The incident which has shocked the Gweru community occurred in Mtapa
high density suburb.
Acting Midlands province police spokesperson, Assistant Inspector
Ethel Mukwende confirmed the incident.
Police identified the girl as 12-year-old Natasha Manunure.
The victim was reportedly struck from behind with a stone on the head
by a man suspected to be mentally retarded.
"l can confirm that police are investigating a case of a Grade Seven
pupil who was struck with a stone on the head by a man suspected to be
mentally unstable. The girl died on the spot as a result of the
assault.
"lt is alleged that when the girl got to Mtapa high density suburb a
man emerged from behind and attacked her," said the police
spokesperson.
Ass Insp Mukwende identified the suspect as Derek who is now in police custody.
Eye-witnesses told NewZimbabwe.com the girl did not provoke the
suspect who is known in the neighbourhood as being violent.
The suspect is expected to undergo medical evaluation to ascertain his
mental state, said the police. LOCAL NEWS.